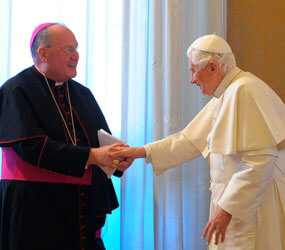 For the first time since Pope Benedict XVI was elected to the papacy, the bishops of the Archdiocese of Baltimore will join other bishops of their region in the traditional “ad limina apostolorum” visit with the Holy Father Jan. 16-21.

Ad limina visits are required every few years to give heads of dioceses around the world a chance to report on the state of their dioceses. The name comes from the Latin for “to the thresholds of the apostles.”

A special report of approximately 200 pages was prepared in advance of the visit and was sent to Rome at the end of November. It contains statistical information and other summaries of the state of the archdiocese, touching on demographic shifts, parish planning, challenges in Catholic education and more.

Cardinal-designate Edwin F. O’Brien, Bishop Mitchell T. Rozanski and Bishop Denis J. Madden will participate in the ad limina visit and will visit various Vatican congregations such as the Congregation of Bishops and the Congregation for the Doctrine of the Faith.

Cardinal-designate O’Brien noted that the discussions with the pope and officials in Vatican congregations will cover not just the four years the cardinal-designate has served in Baltimore, but the seven years since the last ad limina visit – “including the work of my good predecessor,” Cardinal William H. Keeler.

Cardinal-designate O’Brien said the small-group meetings between the pope and regional American bishops will be a vast improvement over the previous format, which involved brief one-on-one meetings with the pope.

“He wants to learn from the bishops,” Cardinal-designate O’Brien said of Pope Benedict.

Cardinal-designate O’Brien participated in ad liminas in the past as archbishop of the Archdiocese for U.S. Military Services and as an auxiliary bishop in New York. Also, as vice chancellor in New York, he prepared all the information that went to the Vatican in advance of the meeting.

“I’ve circled the whole process,” he said, “which is very helpful now.”

The ad liminas will be the first in which Bishops Rozanski and Madden have participated.

“What’s really weighing on our minds is awaiting the announcement of a new archbishop for Baltimore,” Bishop Rozanski said. “That will be on our minds as we go through our meetings. We will see if there’s any indication of a time of the appointment.”

Bishop Rozanski noted that the Baltimore ad limina report contains much information about changing demography. In 2003, the archdiocese had 506,587 Catholics. It numbers 499,529 today. The population has declined in Baltimore, Baltimore County and Western Maryland, while it has increased in Carroll, Frederick and Howard counties.

“I would say that we are much more diverse than probably five or 10 years ago,” Bishop Rozanski said. “There is an energy in that diversity and a real dedication to living out our Catholic faith in all of that.”

Bishop Madden has met Pope Benedict XVI several times, mostly before the pope’s election. He believes the Baltimore participants will take away a sense of the universal aspects of the church. They will also see the pope “face-to-face” as a human being, he said.

“I like him very much,” Bishop Madden said. “He’s a very good man, a very spiritual man. There’s a real depth to his thinking – a real pastoral concern.”

“The major concerns of the archbishop are a key component of it,” said Barr, noting that the bishops will venerate the tombs of Ss. Peter and Paul during their visit. “Here, that’s focused on Catholic education, evangelization, a growing Hispanic community, parish planning, the movement from the city – all those things are part of it.”