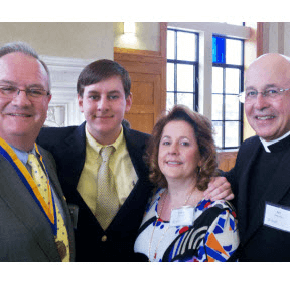 By Maria Wiering
mwiering@CatholicReview.org
TOWSON – There’s a black-and-white photo of John Stewart, Loyola Blakefield’s longtime dean of students, posted on a tribute webpage under the headline “memorable moments.”
Stewart, decades younger, clutches a microphone at his mouth with his right hand as he addresses the all-male student body. In a jocular, mock headlock under his left arm is some unfortunate blonde-haired student, a symbol of Stewart’s role as the school’s disciplinarian. A sign in the background reads “Welcome to Loyola.”
The photo’s caption: “John Stewart’s ‘affection’ for our Dons will be tough to replace.”
Stewart, 71, is leaving his office to work with alumni development and school heritage projects. He expects to retire in a few years. A Loyola alumnus, former math teacher, and former football and lacrosse coach, he became dean of students – then called “prefect of discipline” – in 1981.
In the 33 years since, he’s enforced the Towson college preparatory school’s rules and more, helping to build character in the men passing through its halls.
When the school announced in January that Stewart was “passing the torch” at the end of the academic year, a litany of good-natured inside jokes, quotes, memories and accolades poured in on Facebook, and they continued in March at the annual Blue & Gold Auction, where Stewart was honored. A less formal tribute was offered May 12 at Hightopps Backstage Grille in Timonium, where alumni met Stewart for “The Last Jug.”
“Jug,” or detention, is short for “jugum,” Latin for “burden.” As a Jesuit school, Latin phrases pepper its popular lexicon. For Stewart and the young men he mentored, the Jesuit value of “magis” or “betterment” is at the heart of becoming a Loyola Don. Stewart’s job is rooted in “cura personalis” – care for the entire person, mind, body and spirit.
To that end, Stewart focuses on being fair, firm and consistent, he said.
“If students see that you are firm, fair and consistent, they don’t mind the firm part,” he said.
Respect for oneself, others and Loyola as an institution tops Stewart’s “musts” for Loyola men. Gratitude and service are also emphasized.
“Out motto, ‘Men for Others,’ is not just something written on signs around here,” he said. “It’s of paramount importance here at Blakefield.”
Simple actions such as holding doors and courtesy in the lunch line are among the “lots and lots of little things that really build up good habits,” he said.
Senior Ryan McGarvey called Stewart a great leader and man of integrity.
“He’s the quintessential Don,” he said.
Michael Walden, class of 1988, said Stewart had to “police” him at Loyola, when he was a cocksure quarterback, but helped him to “straighten out.” Now the 43-year-old considers his old dean a good friend and role model whose office he – now willingly – still visits.
“He exemplifies ‘a man for others’ and doing the right thing,” said Walden, a financial consultant and parishioner of St. Mary, Annapolis. “If I had something to share that I was going through, I know he would be there for me.”
Stewart attended grade school at St. Dominic, Hamilton, and enrolled at Loyola Blakefield in 1956, when annual tuition was $350. (It was $18,400 this year.) It was a steep price for his parents; he worked at the school to earn a reduction.
As a student, Stewart had few scrapes with his prefect of discipline, he said. He fondly recalls the regimented example of the Jesuit priests, who were plentiful, and the “big brother” friendship of the Scholastics, men in Jesuit formation.
“It was a great time to come here,” he said.
He’s equally enthusiastic about Loyola’s offerings today, from intellectual rigor to an array of sports and clubs, which attract “the brightest and the best.” Only a few Jesuits remain on campus, but the staff remains committed to Ignatian education, he said.
Stewart graduated high school in 1960 and earned a degree in political science from Loyola University Maryland in Baltimore, where he later returned for a master’s degree in education. After earning his undergraduate degree, he joined the U.S. Army and served in Korea.
In 1967, Stewart returned to Loyola to teach math and coach. A National Lacrosse Hall of Famer, Stewart stepped down from head coach when he became dean of students, but continued for a few years as assistant coach. He also coached the Baltimore Thunder from 1988 to 1993.
Stewart, who attends Church of the Nativity in Timonium, has endured his share of student pranks, including the disappearance of a beloved Clint-Eastwood-as-sheriff poster from his office wall. He was “on a rampage” for several days trying to determine the culprits, until it reappeared, framed, with a brass plaque inscribed “The Class of 1995 Broke the Law; We Love You, Johnny.”
“Whoever takes this job has to have a sense of humor in realizing that you’re dealing with young men,” he said.
Loyola “is a great place to be for anyone,” he added, “and I’ve been fortunate to be here 51 years.”
Also see:
First Communion gift ideas
Catholic universities announce commencement speakers
Four new deacons ready to serve Baltimore archdiocese
PrevNext