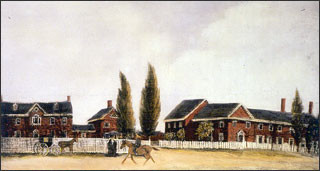 The Church of St. Peter was erected in 1770. When Baltimore became a diocese in 1789, St. Peter’s became the first Pro-Cathedral in the United States. It was located off the west side of the 300 block of Charles Street at Saratoga Street, one block south of the Basilica of the Assumption of the Blessed Virgin Mary.

Prior to 1884, Catholics chose their parish based on their nationality, not on their location. This was not the case with the Pro-Cathedral. Any Catholic living in the area of Baltimore would have traveled to the Pro-Cathedral to receive the sacraments.

The Church was closed in 1841. The structure has since been demolished and now is the site of a parking structure for downtown workers.