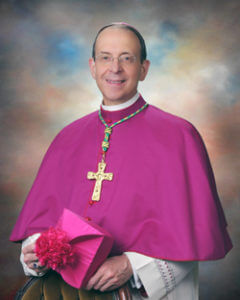 The Most Reverend William Edward Lori, S.T.D., was installed as the Sixteenth Archbishop of the Archdiocese of Baltimore on May 16, 2012.

Born in Louisville, KY, in 1951, Archbishop Lori obtained a Bachelor’s Degree from the Seminary of Saint Pius X in Erlanger, KY, in 1973, and a Master’s Degree from Mount Saint Mary’s Seminary in Emmitsburg, MD, in 1977. In 1982, Archbishop Lori received his Doctorate in Sacred Theology (S.T.D.) from The Catholic University of America in Washington, D.C. Archbishop Lori was ordained to the priesthood for the Archdiocese of Washington by His Eminence William Cardinal Baum in 1977 in Saint Matthew Cathedral in Washington, DC. His first assignment was as Associate Pastor of Saint Joseph Parish in Landover, MD. Thereafter, he served as Secretary to James Cardinal Hickey, Chancellor, Moderator of the Curia, and Vicar General.

In March 2001, he was appointed Bishop of Bridgeport, Connecticut. As Bishop of Bridgeport, Archbishop Lori launched new initiatives in support of Catholic Education, Vocations, Catholic Charities, Pastoral Services, and other ministries, while improving Financial Stewardship. He also worked collaboratively with the laity to increase participation and foster lay leadership throughout the Diocese of Bridgeport.

In 2002, in recognition of his role as an emerging leader on the Church’s response to the sexual misconduct crisis, Archbishop Lori was appointed to the USCCB Ad Hoc Committee on Sexual Abuse. He was instrumental in drafting the landmark Charter for the Protection of Children and Young People. As one of four U.S. bishops on a special Mixed Commission, Archbishop Lori journeyed to the Vatican to seek approval for the “Essential Norms” of the Charter, which is now particular law for the Catholic Church in the United States to ensure that no one who works for the Catholic Church will ever pose a threat of any kind to any person, young or old.

In April, 2011, Archbishop Lori was the keynote speaker at the National Catholic Prayer Breakfast in Washington, D.C., where he paid tribute to John Paul II and urged Catholics to defend his legacy of religious liberty and human dignity. In a speech widely reported across the U.S., Archbishop Lori told the gathering that religious freedom is not “a carve-out” granted by the state, but an inalienable right. He also called for the protection of “conscience rights” for health care providers.

In 2005, he was elected Supreme Chaplain of the Knights of Columbus, where he has the responsibility of overseeing the spiritual welfare of the Order’s 1.8 million members and their families. In his extensive writing and speaking on behalf of the Knights, Archbishop Lori has focused on the spiritual vision of the Venerable Father Michael J. McGivney, the Founder of the Knights of Columbus. Archbishop Lori is also writing a series of monthly articles in Columbia Magazine on the compendium of the Catechism of the Catholic Church. Additionally, he has helped guide many spiritual initiatives of the Order, most notably the Order’s third Eucharistic Congress held in Chicago in 2005, and the International Marian Congress and Guadalupe Festival held in Phoenix in 2009. He has also worked closely with the Supreme Knight in highlighting the role of Knights of Columbus chaplains at every level of the Order. As a result, Archbishop Lori was honored at the April 10, 2010 at the Supreme Board of Directors, meeting in Philadelphia in a resolution that expressing gratitude for Archbishop Lori’s contributions to the Order and the Church.

In his writing, teaching and advocacy, Archbishop Lori has been a courageous voice for religious liberty, having joined with the bishops of Connecticut in protecting the apostolic governance of the Catholic Church in averting the legalization of physician-assisted suicide; and in amending the state’s same sex marriage law to respect the freedom of conscience of Catholic institutions. Most notably, joined by Archbishop Henry Mansell, he led a successful rally on the steps of the Connecticut State Capitol in 2009 to oppose to oppose state interference in governance of the Church. His passion and eloquence that day led to national coverage of this important challenge to religious liberty. When the State of Connecticut Office of State Ethics then tried to penalize the Diocese for its role in the successful rally, then-Bishop Lori filed a federal civil rights lawsuit against the state agency. The State Attorney General refused to defend the action of the state agency, which led to the state’s withdrawal of its threatened investigation of the Church.

On September 29 2011, New York Archbishop Timothy M. Dolan, President of the United States Conference of Catholic Bishops (USCCB) appointed Archbishop Lori the chair of a newly formed Ad Hoc Committee for Religious Liberty to address growing concerns over the erosion of freedom of religion in America.

On October 26, 2011, serving as new head of the Ad Hoc Committee for Religious Liberty of the United States Conference of Catholic Bishops (USCCB), Archbishop Lori called on Congress to defend the American legacy of religious liberty during a hearing before the Subcommittee on the Constitution of the House of Representatives Judiciary Committee. He noted several recent actions by government entities that mark the erosion of the freedom of religion, often called the nation’s “First Freedom.” These actions include a health coverage mandate that would coerce employers to pay for services for which they have moral objections, such as abortion, sterilization and contraceptives, and government contracting decisions that exclude agencies unless they provide such services.

He also urged the House to reject the Respect for Marriage Act (H.R. 1116), which would repeal the Defense of Marriage Act (DOMA). DOMA, which was signed by President Clinton in 1996, defines marriage as between one man and one woman for purposes of federal law and leaves states free to define marriage as they see fit.

Religious liberty “is not merely a privilege that the government grants us and so may take away at will. Instead, religious liberty is inherent in our very humanity, hard-wired into each and every one of us by our Creator,” he said. “Thus government has a perennial obligation to acknowledge and protect religious liberty as fundamental, no matter the moral and political trends of the moment,” he told Congress.

In November 2011, Archbishop Lori addressed the assembled United States bishops at their annual fall meeting in Baltimore. “There is no religious liberty if we are not free to express our faith in the public square and if we are not free to act on that faith through works of education, health care and charity,” Archbishop Lori said in his address to the bishops. In a speech widely reported across the nation, Archbishop Lori warned of the dangers of treating religion “merely as a private matter between an individual and his or her God.” Citing an “aggressive secularism” as a competing system of belief, Archbishop Lori said that recent court decisions and proposed regulations treat religion “as a divisive and disruptive force better kept out of public life,” which the government continues to encroach on individual lives. He called for interfaith collaboration to defend religious liberty and conscience rights in our culture.

Most recently, Archbishop Lori, as Chair of the Ad Hoc Committee on Religious Liberty, has helped to lead the Church’s national effort to roll back a rule by the U.S. Department of Health and Human Services that mandates that all Catholic institutions, including hospitals, universities and charities, offer their employees health coverage that includes sterilization, abortion-inducing drugs, and contraception. “Never before in the history of our nation have citizens been forced to directly purchase something that violates their consciences,” Archbishop Lori said.

In March 2012, Archbishop Lori’s Committee issued Our First, Most Cherished Liberty, a comprehensive statement of the U.S. bishops on religious liberty. The statement opens with the following passage: “We are Catholics. We are Americans. We are proud to be both, grateful for the gift of faith which is ours as Christian disciples, and grateful for the gift of liberty which is ours as American citizens. To be Catholic and American should mean not having to choose one over the other.” It includes examples of the current attacks on religious liberty in the United States, articulates Church teaching and issues a call to action to American Catholics. “In insisting that our liberties as Americans be respected, we know as bishops that what our Holy Father said is true. This work belongs to ‘an engaged, articulate and well-formed Catholic laity endowed with a strong sense vis-à-vis the dominant culture.’”

On March 20, 2012, Pope Benedict XVI named the Most Rev. William E. Lori the 16th Archbishop of Baltimore. The Mass of installation occurred at the Cathedral of Mary Our Queen in Baltimore on May 16, 2012.