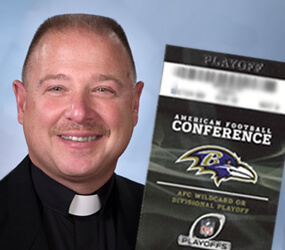 Trinitarian Father Stan DeBoe was raised in Pittsburgh and serves as pastor of a parish just two hours south of Houston, but it’s Ravens’ purple that flows in his veins.

When the Ravens take on the Houston Texans in the AFC Division playoff game Jan. 15 at M&T Bank Stadium, Father DeBoe will be cheering on his favorite team. Who will be sitting next to him is still up for grabs, however, as the season-ticket holder plans to auction off the spot to help buy a bus for his Texas church.

The winning bidder will receive one ticket to the game, airfare from Houston (if needed), lodging and ground transportation.
Since the contest was announced at last weekend’s Masses at Our Lady of Sorrows Church in Victoria, Texas, Father DeBoe has received approximately four bids a day, with the current bid standing at $2,000.

“It’s really creating a lot of energy,” said Father DeBoe. “It was a spur of the moment kind of thing. I would have otherwise sold the seats to one of the other people who sit around me.”

Father DeBoe’s parish has already raised approximately $40,000 for the much-needed bus, which will cost $90,000.

“Texas is a big state and we need a big bus to get around,” the priest said.

Father DeBoe became a rabid Ravens fan while living in the Baltimore archdiocese. He moved to the area in 1977 to join the Trinitarians and has lived at St. Lawrence in Jessup, where he assisted with Masses. He also celebrated Masses for the Catholic Community at Relay and was a teacher at DeMatha Catholic High School, Hyattsville.

The priest acknowledged with a laugh that it’s “kind of sad” that he’s not a Pittsburgh fan since he attended St. Vincent College in Latrobe, Pa. – site of the Steelers’ summer training camp. He called it “great” that the Ravens beat his hometown team in both of their matchups this season.

“I was worried about having to meet them in the playoffs,” he admitted. “We don’t have to worry about that now.”

Father DeBoe’s parish office is festooned with Ravens gear – including signed footballs, bobbleheads and shirts. He always wears a Ravens’ watch and his favorite player is Ray Lewis.

“I love his energy, his drive and his leadership,” said Father DeBoe, who hasn’t been able to attend a game in Baltimore since 2007 and who has been selling his season tickets each year.

The priest is predicting a Ravens’ victory on Sunday. He’ll be okay if Houston comes out on top.

“I feel either way, I win,” he said. “I definitely want the Ravens to win, though.”

Father DeBoe plans to attend morning Mass at the Catholic Community at Relay on game day, but he has no plans of wearing his flowing Trinitarian religious habit.

“If they run late, I have to get out right after the closing song,” he said. “I want to be ready to go.”