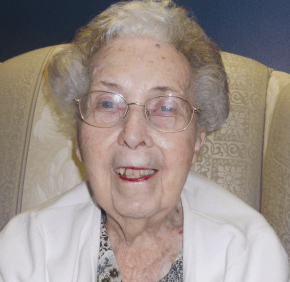 It was 83 years ago, but Elizabeth Emma Rather remembers how she and her fellow students at Baltimore’s Institute of Notre Dame were required to leave the classroom backwards and bless themselves with holy water placed near the door on their way out.

“It was a matter of respect for the teacher,” said Rather, who also recalls how she and the other students had to make use of a wooden board tucked into their waists at the back in order to improve and sustain good posture.

“I guess the sisters were pretty strict but I only thought about them being strict after I graduated, not at the time I was there,” said a smiling, very alert Rather, who will turn 100 Feb. 21.

She will celebrate the milestone Feb. 18 at a party in her honor at Stella Maris in Timonium, where she has been a resident for the past two years.

As for reaching 100 in still relatively good health, her sanguine response was that “it just sort of happened.”

She conceded that while she herself “didn’t make history” in her long lifetime, she was indeed a witness to a lot of it that flowed and sometimes erupted around her in the form of World War I, the Roaring ’20s, the Great Depression, and World War II among other significant events.

Born in 1912 to parents who owned a small grocery store in East Baltimore, she survived the devastating flu pandemic of 1918 that claimed the life of her father and which changed her own life and that of her younger brother, Edward.

Rather’s father, Walter, was a Lutheran, and her mother, Jennie, an Episcopalian, but after his death the new widow and her two young children were taken in by distant Catholic relatives in Waverly, who saw to it that the children were baptized Catholic at their parish church of St. Bernard.

It was an auspicious moment. Rather and her brother were baptized by the young curate at St. Bernard, Father Thomas J. Toolen, who had been ordained a priest two years earlier by Baltimore’s archbishop, Cardinal James Gibbons.

Father Toolen would go on to become the Bishop of Mobile in 1927 and then archbishop, while the five-year-old Edward whom he had baptized would enter Mount St. Mary’s Seminary in Emmitsburg and later become Bishop Edward J. Herrmann of Columbus, Ohio.

No such religious heroics were in store for Elizabeth Rather. Confronted with few worthwhile career choices for young women in the early 1930s, she chose nursing and entered Mercy Hospital School of Nursing, graduating in 1933.

Her nursing career lasted just two years, until 1935 when she met and married Ralph E. Rather, a steamfitter from Havre de Grace. They were married in the rectory of St. Bernard because Rather was not Catholic, although he converted not long after.

The 23-year-old Elizabeth Rather gave up nursing for housekeeping and as time went on, for the care of her three children, Ralph, Mary Ellen and Edward.

Her husband died in 1983 and Rather moved into an apartment in Towson, trading it for life in the retirement community of St. Elizabeth Hall in 1988 and then for Stella Maris two years ago.

“I really like it here,” she said, but noted that she couldn’t be sure if she is the oldest resident.

She does, however, have a recipe for her longevity.

“Never skimp on the sweets, just the vegetables,” she said. “And have good genes.”

“That’s true,” he said, “but she made us eat the vegetables.”