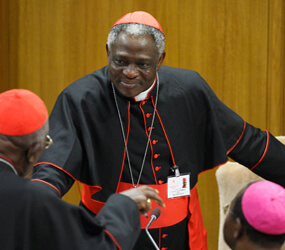 VATICAN CITY – The idea of an African pope captures public imagination, and Cardinal Peter Turkson of Ghana has discovered that it also brings its own set of problems.

As the recording secretary for the Synod of Bishops for Africa, Cardinal Turkson took center stage at the Vatican in early October. He met the press Oct. 5, and they found him remarkably candid and personable, even answering a hypothetical question about a future pope from Africa with the exclamation: “An African pope? Why not?”

He was charming, he was humorous and he had the youthful energy of a man about to celebrate his 61st birthday. Yet the very qualities that made him popular in the Vatican press hall – one headline read, “Could Cardinal Peter Turkson of Cape Coast, Ghana, be the next pope?” – raised eyebrows inside Roman Curia offices.

Specifically, his answer to a question about AIDS and condoms left some Vatican officials shaking their heads – not so much about what he said, but that he said anything at all.

“My God, he spoke about that on the first day of the synod? Why did he have to stir that up?” said one Vatican official.

The Curia fear was that any comments about such a contentious issue risked overshadowing more important synod themes. To make matters worse, Cardinal Turkson spoke in English, and his remarks were so loosely rendered by Vatican translators – and presumed accurate by the non-English-speaking press – that by the end of the day the Vatican press office had a fire to put out.

What Cardinal Turkson said could be boiled down to four important points:

– The experience in Africa is that condom use is effective only “when it goes with fidelity” by the couple involved, when for example one spouse is infected with the HIV virus.

– A wider problem, however, is that in Africa, poor storage and other factors make condoms more susceptible to “bursting during sex,” as the cardinal so bluntly put it, and thus too risky for couples to rely upon. If there were “top quality” and reliable condoms, the thinking might be different, he suggested.

– Sexual abstinence by Catholic couples where one partner is infected with the HIV virus is rare but not impossible, and should be considered in pastoral counseling.

– The resources invested in condom production would be better used for the production of antiretroviral drugs, which are today too costly for most Africans with AIDS.

Cardinal Turkson appeared to be staking out a nuanced position, saying condoms might be considered for married couples as an anti-AIDS measure, if only they were reliable – but since they’re not, the church does well to advise sexual abstinence.

Last March, on a flight to Africa, Pope Benedict XVI told reporters that the distribution of condoms was not the solution to the AIDS crisis in Africa, and in fact made the problem worse.

The comments by Cardinal Turkson and the pope were not necessarily at odds. Moreover, neither addressed the specific question of whether in certain circumstances condom use was morally licit or illicit in AIDS prevention, an issue that is still under study – perhaps indefinitely – by Vatican theologians.

But the European press immediately seized on the African cardinal’s words, portraying them as a challenge to Pope Benedict and the church’s teaching. As headlines like “The bishop says yes to condoms” and “Africa: The church opens to condoms” appeared, along with the mistranslated quotation “I would recommend the use of condoms,” the Vatican press office issued a quickly assembled transcript of what Cardinal Turkson had really said.

The episode seemed to have blown over by the week’s end, but it was a lesson in why candor is not always rewarded by the Vatican or by the journalists who cover Vatican affairs.

His key role of relator, or recording secretary, at the African synod was seen as a clear sign of papal favor. But, as other relators have learned, the job of summarizing discussions and trying to please everyone is a difficult one that draws as much murmured criticism as praise.

It will be interesting to see whether, at the close of the three-week synod, Cardinal Turkson’s big smile and easy manner will have survived his Roman sojourn, and whether a permanent assignment at the Vatican still has appeal.