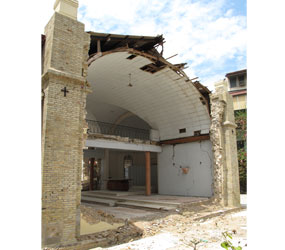 PORT-AU-PRINCE, Haiti – The school year has been extended into July for the Sisters of St. Joseph of Cluny and the nearly 2,000 girls and young women they educate and feed in this capital city.

Their provincial house sits undamaged, but the tents pitched on the driveway are a reminder that nearly all here seek a new normal. So are the tent classrooms, donated by UNICEF, each with seating for 40, on the adjoining grounds of St. Rose of Lima School, where girls from five different educational institutions now learn their lessons in shifts.

Outside the gates of this compound lies more visceral evidence of the reason for the extended calendar and cramped quarters – the Jan. 12 earthquake that took the lives of an estimated 300,000, including more than 30 of the girls taught by the Sisters of St. Joseph of Cluny.

Two of their campuses are down a hill in Centre ville, blocks from the National Palace, which was partially destroyed.

The Catholic Review visited those campuses April 11 with Deacon Rodrigue Mortel, the director of the Missions Office for the Archdiocese of Baltimore, who entrusts the Good Samaritans School he founded in St. Marc, to the northwest, to these sisters.

Beggars, street vendors and mounds of trash lined the streets outside Mere (Mother) Louise as Deacon Mortel, Sister Christine Gervais, the current provincial, and Sister Marie Monique Barthelus, her predecessor, stepped inside a temporary perimeter where work crews hired by UNICEF cleared debris and prepared the site for rebuilding.

The scene outside L’Externat Providence (Providence Day School), another school that had to be leveled, was much the same. Next door, the sisters’ newly-constructed orphanage was destroyed.

After a three-month disruption, school resumed April 12 in those tent classrooms on the grounds of St. Rose of Lima, where the learners include a combined 1,000 girls from L’Externat Providence and Mere Louise. The students include some of the poorest of the poor in the most impoverished nation in the Western Hemisphere.

The altar in the St. Rose chapel appears undisturbed, but its archway was damaged and its worship space condemned. The St. Rose primary school and the Mother Rosalie Javouhey School, named for the order’s foundress, were all leveled after the earthquake, according to an e-mail update from Sister Yannick, who lives and works on the grounds.

The setting is made all the more surreal by the grandeur of the St. Rose of Lima secondary school, which will require minimal repairs.

Constructed in 1891, the rambling French colonial structure is surrounded by lovely gardens and tennis courts. In the suburbs north of Baltimore or Washington, D.C., parents pay upwards of $20,000 in tuition annually for a similar setting.

“This is the best girls’ high school in Haiti,” Deacon Mortel said. “This is the school everyone would like their daughter to attend.”

“Even the buildings that haven’t collapsed,” Deacon Mortel said, “their parents don’t want them to go back in.

During a tour of the secondary school, Sister Marie Monique paused near a laminated poster that memorializes 10 of the girls who died as a result of the earthquake. Three of the sisters in the order sustained serious injuries, including one who still can’t walk.

“Roads were blocked, you could see bodies everywhere,” she said to Deacon Mortel in French, which he then translated. “Children were helping to remove the bodies.”

In addition to the fatalities, recent estimates put the number of people displaced by the earthquake at 1.1 million. With hurricane season arriving soon, it is imperative that solid ground be staked out.

NEXT: A religious sister spends her retirement years ministering to prisoners.

HOW TO HELP: On the web, visit the Missions Office at archbalt.org; Sisters of St. Joseph of Cluny at sjc.ie; or Catholic Relief Services, at crs.org.