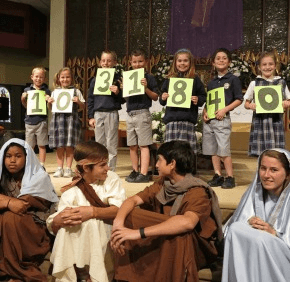 DESTREHAN, La. – The prayerful protection of Mary has been showered upon Pope Francis 1 million times over, thanks to students and their friends at St. Charles Borromeo School in the New Orleans Archdiocese.

On Holy Thursday, April 2, just before the start of the school’s monthly rosary, religion teacher Lisa Benoit, accompanied by seven students bearing numbered placards, made a joyful announcement: The school’s 2014-2015 goal of praying 1 million Hail Marys for the safety of Pope Francis had not only been met, but exceeded.

“I thought it was going to happen after Easter break, but so many people have been helping and adding to our numbers,” said Mary Schmidt, school principal, as students cheered and clapped in their pews. “I’m thrilled!” Schmidt added. “What a wonderful send-off for Easter!”

Students at the Destrehan elementary school, outside of New Orleans, launched the prayer effort last September in response to media reports that identified the pontiff as a potential target of the Islamic State, known as ISIS.

“We are always trying to impress upon the children how powerful prayer is,” Schmidt said. “We tell them all the time that the prayers of little children are especially powerful, because Jesus listens in a special way when they pray.”

During the first few months of school, the prayers poured in, with St. Charles Borromeo’s 462 students praying five Hail Marys for the protection of Pope Francis during morning announcements – meaning that a minimum of 2,340 prayers were built into every school day.

The students also started leading Hail Marys at home with their families and reporting the count to Benoit, coordinator of the million-prayer campaign. Their march toward the seemingly elusive number was tracked on a graphic in a school hallway.

Still, as diligent as the students were, time was becoming a factor. At the midpoint of the school year, the Hail Mary count was not yet at 500,000, prompting Schmidt to enlist the help of students at Brother Martin and St. Charles Catholic – high schools with faculty links to St. Charles Borromeo Parish.

An article on the school’s prayer effort, published in the March 7 issue of the Clarion Herald, newspaper of the Archdiocese of New Orleans, widened the net even more. Strangers began contacting the school to offer their prayer muscle to the campaign.

A local businesswoman contacted Schmidt to say that instead of listening to “mindless radio chatter,” she would be saying 10 Hail Marys for Pope Francis on the way to work and another 10 on her drive home.

The St. Jude Society at St. Mary Magdalen Parish in Metairie devoted its nine-hour devotional to St. Charles Borromeo’s prayer campaign and personally delivered the results to Schmidt: a pile of index cards with numbers and signatures representing each member’s contribution, which totaled 9,430 Hail Marys.

In a move that took the school’s effort to a national audience, St. Mary’s Messenger children’s magazine reprinted the Clarion Herald article on the Hail Mary drive in its spring issue.

“I don’t think it’s coincidental that we made our 1 million goal on Holy Thursday,” Schmidt told her students. “Jesus and our Blessed Mother were with us the whole time we were trying to reach our goal, and the fact that we did it on Holy Thursday just lets us know he wanted us to be successful,” she said.

“(Christ) loves us so much we can’t even understand it here on earth,” the principal added. “That’s what Easter is about.”

Donze is a staff writer at the Clarion Herald, newspaper of the Archdiocese of New Orleans.

Lesson of Special Olympics is ‘all life is beautiful,’ Shriver says