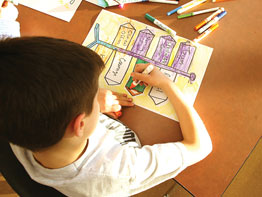 Imagine children who have been removed from their home for their own protection.

Imagine that these children are abused and frightened. They have physical and psychiatric problems so deep that most care providers with the best of intentions can’t help them.

But there is one place that does give these children the complete continuum of care they so desperately need.

“One of the highest we saw was 18 different placements prior to coming here,” Mr. Dunphy said. “We admitted a kid removed from a traumatic situation, and within 30 days he had been in five different placements. They realized this child was going to need more than they could find in the communities.”

And these children are under 14, says Mary G. Rode, administrator of St. Vincent’s Center, which is part of Catholic Charities.

Why does St. Vincent’s Center work when so many other places don’t?

Start with the physical space. Every child has his or her own room. The windows in the rooms are up high on the wall; a child needs to feel secure knowing no one can watch them or climb in. “The child has to feel safe enough to benefit from the therapies. For children who have been sexually abused, it’s so critical,” Ms. Rode said.

“The program is solely designed to help children heal from trauma and help families heal,” Ms. Rode said. St. Vincent’s is where that cycle of abuse finally breaks. Family members learn to understand the child’s behavior and develop techniques to deal with it.

Although it is licensed as a residential childcare facility, in fact St. Vincent’s is a diagnostic and treatment program. The intense diagnostic program is key to the program’s success.

“We look at every part of a child’s life, including the spiritual side,” Ms. Rode said.

It’s not just a matter of taking a child to see a doctor, because “the behaviors themselves present a challenge to provide care,” said Mr. Dunphy.

Some abused children also suffer violent mood swings, aggression and severe sexual behavior problems. He recalled one child who destroyed a doctor’s office, and another who attacked a doctor trying to do a psychiatric evaluation.

St. Vincent’s has its own health suite, with a pediatrician and nurses who are able to handle such behaviors, as well as psychiatrists and psychologists.

The tradition of helping children stretches back to 1856 when the Daughters of Charity of St. Vincent de Paul started a house for unwed mothers and orphans in Druid Hill. They settled into larger quarters at Lafayette and Division streets and stayed there until 1934, when they moved to Reisterstown Road. The current center was built in 1963, but underwent a $12 million renovation two years ago.

Prior to the ’60s, the orphans stayed and were raised by the nuns. But as orphans decreased, the sisters partnered with social services “to take care of a different type of orphan,” Ms. Rode said, adding the focus shifted to children who were neglected and abused and who stayed for months rather than years but needed far more services.

At any time, St. Vincent’s Center treats around 70 children, serving about 135 a year, and most stay an average of 13 months. All children who come to St. Vincent receive an initial diagnostic assessment. Some go to a designated diagnostic unit and attend school there. The majority go to one of the other five long-term treatment units and attend public school. Each of the units has licensed clinicians. The center also offers psychiatric and psychological services. The units also feature comfortable, home-like dining areas and family rooms.

When children leave, 42 percent are able to go back to their families, “which speaks to our effort to help families,” Ms. Rode said. Most of the rest of the children are either adopted or go to therapeutic foster care homes.

Such a total approach does not come cheap. “Eighty percent of my budget is salaries,” Ms. Rode said. “We are very staff heavy because we believe the healing process starts with a relationship. It starts with a sense of trust – that there are adults who will not hurt you, who will help you.”

Many of the children, who have suffered unspeakable abuse, have never experienced a birthday party – or the sense of wonderment that characterizes childhood.

“We balance providing a wonderful childhood experience with high-level clinical care – it’s both, not one or the other,” Ms. Rode said.