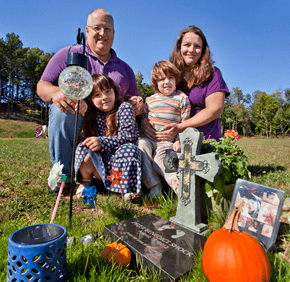 By Maria Wiering
mwiering@CatholicReview.org
NOTTINGHAM – The first day of Peter Benedict’s life was also his last.
He lived three-and-a-half hours. His parents are grateful he lived at all.
Steve and Stephanie Shock, Peter’s parents, learned they were expecting in November 2011. It was her fourth pregnancy. Their first daughter, Julie, is 6 and healthy. Their second daughter, Natalie, 4, has partial Trisomy 13, a genetic disorder that delays her development. Their third child miscarried at seven weeks.
Steve, 50, and Stephanie, 32, were hopeful for a healthy pregnancy. Early indications were that all was well. It was not until they saw an ultrasound at 14 weeks that they realized that Peter’s cranium was not developing normally.
Peter had anencephaly, a serious birth defect where parts of the brain and skull do not form.
“You can’t even describe the devastation,” Stephanie said.
They soon learned that, like Natalie, Peter had a genetic disorder, but a much worse prognosis.
According to the Centers for Disease Control and Prevention, about one in every 5,000 babies born annually in the U.S. will have the condition. However, as many as 95 percent of anencephalic pregnancies are aborted, and the condition is often cited in arguments to support legal late-term abortion.
Of those carried full-term, many are stillborn, and others usually die within hours or days.
Parishioners of St. Ursula, Parkville, the Shocks never considered abortion, Stephanie said. She never felt pressured by doctors to do so, she said, although she has spoken with other women who have. Carrying an anencephalic child does not affect the mother’s health, she said.
At first, Stephanie did not know how she would bear a pregnancy she knew would end in heartbreak. However, the weeks started to fly by, she said, and she wished she could make her pregnancy last longer, to keep Peter with them.
As they wrestled with their emotions, the Shocks had fallen deeply in love with Peter. They cherished the ultrasound photos they had of him, and wondered if those moments would be the only time they saw him alive.
Stephanie started a blog, “Loving Peter,” to update family on her pregnancy.
“I felt like some people didn’t understand why I didn’t have an abortion, and I wanted people to know that all life has value. Just because he was only a few inches long and wasn’t going to live didn’t mean he wasn’t my son, and I wanted people to see that,” she said.
“As it went on, I wanted to share the joy that he brought us,” she said. “Even in the suffering, we were experiencing joy. I want people to see that his life had meaning.”
Interest in the Shock’s story spread well beyond family and friends, as did prayers for them. Knowing hundreds of people were praying for them helped Stephanie, especially when she felt she could not pray herself because of anger or despondence.
Debbie Johnson, 41, a Catholic in Boise, Idaho, is among those who prayed. A Facebook friend, she was moved by the Shocks’ celebration of Peter’s life.
“Our culture is so broken, and thinks that children who aren’t perfect are disposable. The perfection that existed in this imperfection was so beautiful,” she said.
The Shocks found peace as they prepared to say hello, and then goodbye. Neither was anxious for Stephanie to go into labor, which she did Aug. 16. Peter was breech, and Steve spied his son’s foot first, with wiggling toes. Stephanie reached down to feel Peter’s toes, and she started to cry.
“That was incredible, partly because I knew he was alive,” Steve said. “The most important thing to her and to me was that we wanted to spend some time with him before he passed. If he had been stillborn, I don’t know what my state would have been. It probably would have been pretty bad.”
Redemptorist Father John Harrison, associate pastor of St. Mary in Annapolis, immediately baptized Peter Benedict after he was born at Anne Arundel Medical Center in Annapolis, near the birthing center where Stephanie received care in Arnold. The Shocks chose their son’s name to honor the first and present popes.
They took Peter home and held him – wearing a tiny hat Stephanie had knitted – until he died a few hours later. That time with him wasn’t sad or depressing, Stephanie said.
“I think it was like any other parent with his newborn,” she said. “I didn’t find myself worrying about how long we had, we were just in the moment. We just enjoyed every second we had with him.”
Peter was buried Aug. 20 in his baptismal garments. In the following days, Stephanie felt empty. She cried daily, but slowly, she cried less.
Despite the heartache, the Shocks consider Peter’s life and their experience a blessing. They are coping better than expected, which they attribute to faith in God and the promise of heaven.
“If it wasn’t for our faith, I don’t know how we would be handling this,” Steve said.
Peter’s grave is a five-minute walk from the Shocks’ home, in an area that, until recently, was wooded and a favorite place for the family to explore nature. It was developed into a cemetery by St. Joseph, Fullerton, which donated the plot to the family.
They visit the grave daily, if just for a few minutes, to pray and tell Peter they miss him.
On Peter’s one-month birthday, Stephanie wrote on her blog that her life was returning to a “new normal.” That includes a deeper interest in heaven, which is now a regular family conversation topic. Stephanie thinks it is likely that Peter was blind, and takes comfort in the thought of Jesus being the first person he saw.
“I long for heaven like never before,” she wrote in late September. “I truly believe this will help me be a better Christian. It certainly makes me want to do everything I can to get there, and to make sure my family is there with me.”
Stephanie Shock’s blog can be found at https://lovingpeter.blogspot.com.
Copyright (c) Oct. 15, 2012 CatholicReview.org
PrevNext