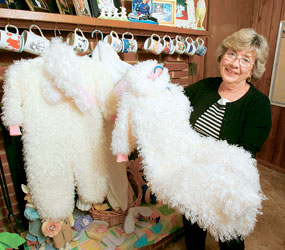 Kay Bowman displays some of her costume creations that were used for a children’s ministry pageant at St. Philip Neri in Linthicum Heights. (CR photo/Owen Sweeney III)|

With spring here, Kay Bowman’s fancy turns lightly to thoughts of love – not the romantic kind the poet Tennyson had in mind, but love for the children of her parish, St. Philip Neri in Linthicum Heights, and its school.

A registered nurse who is part of the parish school’s daycare staff, Bowman is a remarkably skillful, self-taught seamstress whose costumes bring school plays, pageants and other events brilliantly alive.

“She is just amazing,” said Maureen Muller, her friend and fellow children’s ministry volunteer, “but she is far too modest to ever take any credit for all the wonderful, hard work she does behind the scenes.”

“Well,” Bowman explained, “I love children and it’s great to see them get so excited when they put on their costumes.”

She is planning how she can help with the upcoming school spring play, “Aladdin,” written for a large cast in which every child has a line and, of course, a costume.

She said she was a “little embarrassed” about being interviewed lest she be “seen as bragging,” and laughingly blamed Muller, who was insistent that her friend be recognized for her hard work and commitment to the children of the parish.

“She won’t admit it,” Muller said, “but her talent is so remarkable and people who come to the performances are amazed by what they see.”

“She’ll tell you that she’s not that special, but she just has a God-given talent that turned into a marvelous skill,” Muller said.

While a variety of school performances are scheduled through the year, the busiest time for Bowman is the Christmas season, when the parish children’s ministry, formed in 1998 and strongly supported by the pastor, Father Dale Picarella, organizes and orchestrates seasonal plays and live nativity scenes.

St. Philip Neri’s pageants have a certain “look” about them that is quite stunning in their imaginative beauty. As Muller insists, that is due in large part to Bowman’s creativity and sewing skills.

“She really is amazing in what she does for the children,” said Muller, whose parents were very involved in establishing the parish in 1964.

“I think I’ve done every biblical character except Noah,” Bowman said with a chuckle.

Bowman begins work on the costumes in early October for Christmas pageants, which involve as many as 40 children. Some pageants and plays are particularly challenging, such as “St. Francis and his Mother” in 2007.

It featured all sorts of animals – deer, horses, birds and other creatures – all of which Bowman designed and made using heavy wool and other material. She had to visualize what St. Francis’ mother, Pica, may have worn, since little is known of her other than she is said to have belonged to a noble family of Provence.

“It was a challenge,” Bowman acknowledged, “but I really liked doing it.”

Bowman’s favorite creations are the exotic costumes of the Three Wise Men.

“They’re the most interesting because of their beauty,” she explained. “I made them with silky materials of brilliant colors, while my other favorites were the little lambs which I made out of a curly, fuzzy material that turned out really well.”

Bowman has accumulated a lot of costumes in the past dozen years, most of which are stored in a closet at Muller’s home. She does not have to work quite as hard as she once did, since many of the costumes can be re-used, while others require only a little alteration.

But it still requires work, commitment and dedication. Why does she do it, investing so much time and creative effort?

“It’s for the children, of course,” Bowman said. “I love them and I love doing it. It makes me feel good.

She credits her devotion to the Blessed Mother for what she is able to accomplish and points especially to the help of St. Anthony of Padua.

“Every time I lose something important, like buttons or material,” she said, “I say a prayer to St. Anthony and he always finds them for me.”