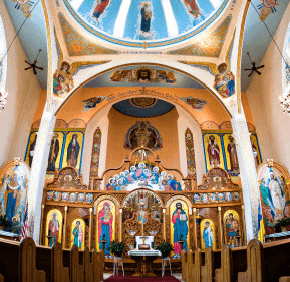 Irene Traska was overcome with emotion after a liturgy celebrating the centennial of St. Michael the Archangel Ukrainian Catholic Church.

Traska, who moved to Baltimore from Ukraine at age 6, drove more than an hour Nov. 11 from her Keedysville home in Washington County to the church on Patterson Park in Baltimore. Traska celebrated her first Communion and was married at the parish.

“We grew up here,” said Traska, who attended St. Elizabeth School, Seton Keough High School and Notre Dame of Maryland University, all in Baltimore. “I love the music.”

The Eastern Catholic church is in the Archdiocese of Baltimore but falls under the Ukrainian Catholic Archeparchy of Philadelphia.

Metropolitan Archbishop Stefan Soroka and Father Vasyl Sivinskyi, pastor, were two of the five clergy members at the Mass.

During his homily – almost entirely in Ukrainian – Archbishop Soroka said “you are called to be like God in all things.”

About 250 people, many of whom are fluent in English and Ukrainian, filled the small church during the two-hour liturgy, which was mostly sung and in Ukrainian. A reception, dinner and dancing followed Mass.

John Wojtowycz, a parishioner and co-chair of the centennial committee, said the celebration was important “because the core value of your culture and beliefs continue.”

Andrij Chornodolsky, a parishioner since moving to Baltimore from Ukraine at age 4, co-chaired the committee.

“To me and to the community it really says a lot,” Chornodolsky said of the centennial. “We’re talking about several different waves of immigrants that have gone through this parish, and their children and grandchildren in instances.”