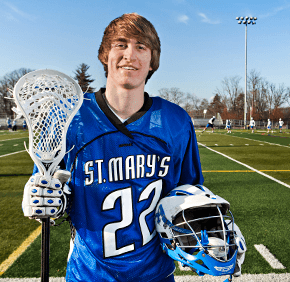 By Elizabeth Lowe
elowe@CatholicReview.org
Twitter: @ReviewLowe
ANNAPOLIS – Michael Stehle’s face lights up when he explains how his faith has been strengthened in the past year, after he began attending youth Masses and enjoyed a powerful retreat experience.
“I got serious about my faith,” said Stehle, a senior at St. Mary’s High School. “God is the answer to every question I could ever have. Whenever I need him, I just find him.”
Last fall Stehle attended a Kairos spiritual retreat, a movement whose concepts are based in Ignatian spirituality, and he just recently helped lead a similar four-day retreat in Pennsylvania for members of his school’s junior class.
“It’s an eye-opener for you,” he said.
At St. Mary’s, Stehle is a youth minister. He is an extraordinary minister of holy Communion at school and church. He attends St. John Neumann Mission Church in Annapolis, a mission of St. Mary, Annapolis.
“It’s a necessary aspect of our life,” Stehle said of regular Mass. “It’s good that we have realized that this is necessary and God is calling us to go.”
Ginny Dauses, St. Mary’s campus minister, called Stehle “one of our greatest leaders in campus ministry.”
“What makes a perfect Christian leader is someone who is selfless,” said Dauses, who pointed out that Stehle displays that characteristic because “he puts God first, family second and himself way below everything else.”
The 17-year-old volunteers – without the motivation of service hours – to help Dauses with confirmation and freshmen retreats.
“I tell kids to get involved (in their faith) early, and share my story,” Stehle said.
Last September, Stehle was part of a select group of about 40 students and 10 campus ministers from 10 Catholic high schools in the Archdiocese of Baltimore who participated in a daylong conference in Sparks to discuss how to share their faith.
“The community and the Catholic faith is just everywhere,” said Stehle said. “You find God is in everything and everyone.”
Stehle, who has participated in the national March for Life in Washington, D.C., three times, is as dedicated to his studies and sports as he is to his faith. He takes advanced placement and honors courses, is a member of the National Honor Society and carries a solid B average.
Stehle plays basketball and lacrosse for the Saints, the latter as a defensive midfielder in the Maryland Interscholastic Athletic Association A Conference, arguably the nation’s premier high school league.
“Whatever season it is, that’s the sport I’m enjoying,” Stehle said.
He plans to major in sports and entertainment management, with a college selection to come.
Mike Stallings, Stehle’s counselor at St. Mary’s, described him as “very friendly, outgoing, intelligent, athletic. I couldn’t imagine a better role model.”
“The smile,” Stallings said, “tells you a lot.”
Michael Stehle
St. Mary’s High School
Senior
Credentials: Attends St. John Neumann Mission Church in Annapolis; youth minister; extraordinary minister of holy Communion; Kairos retreat leader; National Honor Society; plays varsity basketball and lacrosse.
Also see:
Mercy senior makes waves overseas

IND senior is committed to service