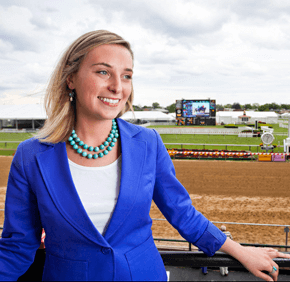 By Elizabeth Lowe
elowe@CatholicReview.org
Twitter: @ReviewLowe
With parents, an older sister, aunts and uncles in the horse-racing industry, it’s no surprise Gabby Gaudet followed in their footsteps.
“It’s been in my blood,” said Gaudet, a 2009 graduate of St. Mary’s High School in Annapolis and a Towson University alumna come May 23. “I love horse-racing and it’s going to be with me to the day I die.”
In September, the 22-year-old will replace Frank Carulli, the current racing analyst for Pimlico Race Course in Baltimore and Laurel Park. Carulli, 51, is retiring next month after holding the position for 11 years.
After beating out a dozen or so candidates who vied for the position, since early April Gaudet has been learning the ropes of her new job, which includes TV analysis before each race, blogging and social media.
“It’s a really interesting job,” said Gaudet, daughter of longtime thoroughbred conditioners Eddie and Linda Gaudet. “I’m excited to try to get this under my belt and hopefully look ahead.”
As the racing analyst, Gaudet will paint a picture of upcoming races.
“My job is to pick out the winners and analyze how the race is going to be set up,” said Gaudet, who double-majored in mass communications and graphic design.
“What we thought was, let’s try to hire a fresh face,” said Mike Gathagan, vice president of communications for the Maryland Jockey Club and a parishioner of the Catholic Community of St. Francis Xavier in Hunt Valley. “She’s improving every day she is on the air. She’s been around the game her whole life. It helps when she’s handicapping. She can look at it a different way.”
Gathagan predicts Gaudet could become a “rock star in the industry.”
“Her job is to analyze the race (and) that takes time to learn,” said Carulli, who noted the public should be able to make somewhat of an informed decision for how to bet based on Gaudet’s one- to two-minute sound bites. “It’s not an easy thing to jump right into. We’re like news anchors relaying a story on nine horse races each day.”
He continued, “If you’re doing a good job and providing good information, you’re doing the legwork for the public. You’re giving them some added information.”
“There’s so many good stories at the track, there’s so many awesome people here,” Gaudet said. “My favorite part is interviewing the trainers and owners and jockeys after the stakes (races).”
The biggest annual sports event in Maryland, of course, is the Preakness Stakes. This year’s middle leg of the Triple Crown comes May 18, when Gaudet will be working behind the scenes “doing anything and everything.”
“It’s a fun time of year for Maryland and Pimlico,” Gaudet said, “and everyone’s working so hard to get everything ready. The best part about it is getting people out who don’t often come to the racetrack and bringing a whole new crowd.”
For horse-racing lovers, the newbie racing analyst is pulling for Orb, the horse that won the Kentucky Derby May 4.
“That’s the one I’m going be rooting for,” Gaudet said.
*Did you know Orb has his own Twitter account? Check it out.
To read more about Gaudet, click here.
View a photo gallery from last year’s race with Archbishop Lori.
Copyright (c) May 16, 2013 CatholicReview.org
PrevNext