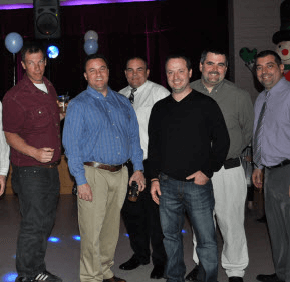 In an effort to get fathers of students at St. Joseph School in Fullerton involved in the school, a fathers club was formed in 2010.

Brian Petr, president of the Fathers Club, said that he and other fathers “wanted to have more of an impact on our children’s school experience.”

Since the club’s inception, the fathers have built a fence around the school’s dumpsters, investigated the cost of a sports court for the school playground, installed new computers in classrooms, painted the preschool entrance awning and organized fundraisers, including a golf tournament that raised $10,000 for the school.

Phyllis Karko, principal of St. Joseph, expressed her gratitude to the group.

“They give up their own time to do projects for our school that might not happen were it not for their perseverance,” Karko said in a statement.“They are a great group of guys who are a joy to be around. What a statement they make about their generation of fathers and their willingness to be involved in the lives of their children.”

Mark Dilorio, vice president of the Fathers Club, said he joined the group to get involved with the school and to “show my kids that volunteering at school can make a difference and be fun.”

The club is working to recruit new members, including grandfathers, to take on additional projects.