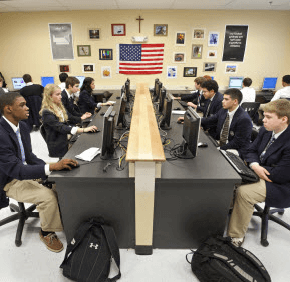 BUCKEYSTOWN – Diane Favret was so excited for St. John’s Catholic Prep to open at its new location she hardly slept the night before.

Favret, the high school’s executive director of institutional advancement, said the move “has been a long time coming.”

The first day in the new building – which smelled of fresh paint – was smooth, said Gordon Oliver, St. John’s president, as photos were still being hung and floor mats were put into place.

The Frederick County school and property were formerly occupied by St. Thomas More Academy, a pre-K-8 school that relocated to Middletown for the current school year.

Baseball and softball fields are being developed, Harraka said. For now, the teams will use the facilities at its former site.

“This new facility gives us a home for the next 100 years,” Harraka said. “We’re really excited about being able to stay in the community and provide a Catholic education for all who seek it.”

Construction and renovation cost $1.8 million, Harraka said. St. John’s has entered a contract to sell its former location for $4.5 million. The centuries-old Prospect Hall mansion will remain, but the property is expected to be developed for residential use.

St. John’s, established in 1829, had been at the mansion since 1958, but outgrew the Prospect Hall campus, said Oliver, who noted that at 40,000 square feet, the new building is 10,000 square feet smaller than the former location, but the space is better utilized and more efficient space.

St. John’s has 262 students, but can accommodate more than 140 additional students, Oliver said.

Paul McNickle, a theology and geology teacher at St. John’s for 18 years, is thrilled with the move.

McNickle, who likes the additional space and lack of steps, said “we’re blessed to be here.”