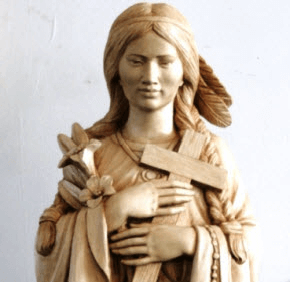 Retired Baltimore Auxiliary Bishop William C. Newman is expected to celebrate the 11:15 a.m. Mass Oct. 21. Oct. 19 is the feast day of St. Isaac Jogues, who had ties to Native Americans.

Blessed Kateri is one of seven saints, two American saints, who will be canonized Oct. 21 by Pope Benedict XVI at the Vatican. The other American is Blessed Mother Marianne Cope, who spent 30 years ministering to the sick on the Hawaiian island of Molokai.

Blessed Kateri, of Algonquin and Mohawk descent, was born in 1656. She was orphaned as a child and raised by her uncle, chief of the Mohawk village. A smallpox epidemic impaired her eyesight and scarred her face. Despite her family’s anger, she was drawn to the faith and went to Montreal, where she practiced her faith.

“Kateri’s life is a witness not only to the cost of discipleship – she bore a great deal of suffering for her faith among her own people – but also to its fruitfulness,” said Archbishop Charles J. Chaput of Philadelphia, chairman of the U.S. Conference of Catholic Bishops’ Subcommittee on Native American Affairs and a Capuchin Franciscan Friar, in a statement.

“It wouldn’t be there if it wasn’t for the youth,” Father Hammond said. “It’s very lovely. I hope she watches over the parish.”

About $3,000 was raised to pay for the statue through spaghetti dinners, candy bar sales and donations, among other fundraisers, Father Hammond said.

“It’s a way to appreciate the rich heritage of the Native Americans and the inspiring virtue of a young woman who held onto her faith and the Lord,” Father Hammond said.

The parish’s book of the sick rests on a podium below the statue.

“People look up to her,” Father Hammond said. “It’s like her own little chapel over here.”

In addition to the statue, the parish has a room named after Blessed Kateri, a second statue and photos of her.

“It doesn’t happen that much and the fact that the feast of St. Isaac Jogues is Oct. 19, it’s right around the same time,” Richardson said. “It makes it real special.”

At the Oct. 21 Mass, Bishop Newman is also expected to bless the parish’s newly renovated church hall, which opened Sept. 23.