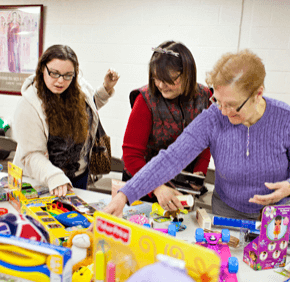 By Elizabeth Lowe
elowe@CatholicReview.org
Twitter:@ReviewLowe
ESSEX – Despite speaking different languages, St. Clare parishioners make the effort to get to know one another.
That was evident when hundreds of English- and Spanish-speaking parishioners attended a Saturday evening liturgy in November that incorporated both languages, followed by a multicultural potluck dinner which featured a plethora of homemade ethnic dishes.
“It was one of the nicest things we’ve had at St. Clare in a long time, bringing the two communities together,” said Dolores Amrhein, a parishioner of 56 years and president of its St. Vincent de Paul conference. “It didn’t seem like there was a language barrier.”
Given the success of that recent gathering, St. Clare plans to schedule the dinners quarterly, said Father Jesse L. Bolger, parish administrator since July 2013. He notes that St. Clare has seen an increase in Spanish speakers over the past decade.
“We are trying to integrate our parish,” said Father Bolger, who noted that integration includes one schedule of religious education. “This parish is not xenophobic.”
Of approximately 1,000 families who worship at the Eastern Baltimore County parish, about 300 people speak Spanish, said Jeannette Suarez, a native of Mexico who is St. Clare’s bilingual administrative assistant.
“The people are feeling welcome here,” Suarez said of the parish’s efforts to operate as one faith community.
Suarez noted that English- and Spanish-speaking parishioners worked together to run the parish carnival last spring.
The Spanish-speaking community brings “an element of worship to our parish that is cultural,” said Mary Anne Callaghan, a St. Clare parishioner of 12 years who, with her husband, Leo, volunteers with its Haiti outreach committee.
Spanish-speaking parishioners have “a fervent faith,” Father Bolger said. “We (the English-speaking community) can learn a lot from their practice of the faith.”
While Father Bolger does not speak Spanish, he works to connect with parishioners who do, and worshipers have taken notice.
“The community is very happy with Father Jesse,” Suarez said.
Trinitarian Father Juan Vazquez-Rubio, St. Clare’s associate pastor, celebrates the parish’s Saturday evening Spanish Mass. Father Bolger has a presence at that liturgy.
“My showing up, greeting parishioners after the (Spanish) Mass, saying ‘buenas noches’ (good night),” Father Bolger said, “they can tell (I’m trying).”
“We’re trying to do it as one parish instead of English and Spanish,” said Pat Bricker, a St. Clare parishioner for 30 years who runs the parish’s food pantry. “This is a very welcoming parish and a very welcoming church. I wouldn’t want to be anywhere else.”
Also see:
Archdiocesan campaign surpasses $100 million goal
Former Anglican clergyman celebrates first Christmas as a Catholic priest
PrevNext