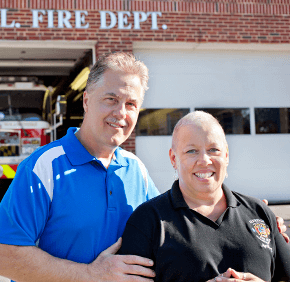 By Maria Wiering
mwiering@CatholicReview.org
On New Year’s Eve, Tami Scovitch discovered a huge lump in her left armpit.
A biopsy confirmed her fears: She had breast cancer.
When she heard the diagnosis, she said, she felt a sense of isolation.
“You feel alone at first, secluded. It’s just you. It’s all about you now,” Scovitch said. “You look around for advice and any inspiring words.”
That feeling didn’t last long. Her first call was to her husband of 31 years, Tony. “Once I told people, it was like I had this whole pack with me, and I never walked alone,” she said. “It was my journey, but I walked it with so many people.”
A parishioner of St. Augustine, Elkridge, and a patient of St. Agnes Hospital in Baltimore, Scovitch shared that perspective in a video for a new campaign St. Agnes launched to coincide with October, Breast Cancer Awareness Month.
Cancer uncaught
The 52-year-old had discovered benign lumps in her breast before. In July 2013, she had discovered a new lump and had a mammogram and sonogram. She felt like her technician wasn’t thorough and voiced her concern, but the technician assured Scovitch the scans were clean.
The lump continued to bother Scovitch. In October, she told her gynecologist that she wanted a second opinion. She scheduled a biopsy in November. The day of the surgery, when Scovitch was under anesthesia, the surgeon unexpectedly decided against the biopsy because he was certain it was a benign cyst.
Despite two medical opinions that Scovitch was cancer-free, she remained unsettled, and the armpit lump revealed why. By the time it was discovered, Scovitch had cancer in her left breast, armpit and her neck, a stage IV diagnosis.
Community impact
Scovitch’s daughters were furious that other doctors had missed the cancer, but she only looked forward.
With a team of St. Agnes doctors, Scovitch went through four rounds of chemotherapy before a double mastectomy April 3. That surgery was followed by more chemotherapy and then radiation. As of late September, she had 20 more rounds of radiation to go.
Fellow parishioners of St. Augustine, where Scovitch has taught religious education, rallied around her, as did the Elkridge Volunteer Fire Department.
Decades ago, Scovitch joined the department’s ladies auxiliary because of its close community and charitable work. As president, it was usually her job to plan benefit dinners for people who were sick, but her cancer turned the tables. The fire department held two fundraisers for her, which helped with the cost of treatment.
St. Agnes’ case workers also connected the Scovitches with options after Tami lost her job-based insurance, she said.
Scovitch chose St. Agnes’s Breast Center for her cancer treatment with the advice of a friend, and called her care “phenomenal.”
Her two misdiagnoses occurred at institutions not connected to St. Agnes.
“I always tell my husband, I’m so glad I picked that place,” she said. “Everybody’s so positive. I just can’t speak more highly of the care that I got there, and the people there that make you feel so comfortable.”
Not alone
In St. Agnes’ video, Scovitch’s friends and family share their experience of Tami’s diagnosis and treatment, what Scovitch calls her “journey.” Scovitch hopes sharing her story helps others not feel alone, she said.
It’s a mission she’s made personal.
On a recent shopping trip, Scovitch said, a stranger approached her and shared she was also fighting breast cancer, but was struggling with a negative body image. Scovitch gave the woman her phone number, and they’ve talked numerous times since.
In St. Agnes’ video, Scovitch’s daughter, Jessica, describes her mother as someone people “magnet to.”
“Everyone just pulls toward her and can’t help but love her,” she said.
Also see:
Renovated St. Agnes Hospital chapel sparkles
St. Agnes’ new community center pays homage to Baltimore’s Babe
Parkville mom making big strides in raising funds for people with autism
Longtime Mercy volunteer concludes five decades of service
PrevNext