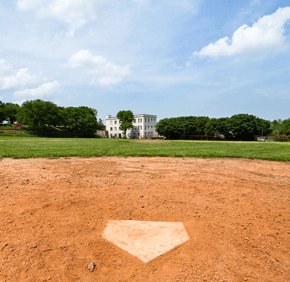 By Maria Wiering
mwiering@CatholicReview.org
Twitter: @ReviewWiering
CATONSVILLE – He’s called “The Bambino,” the “Sultan of Swat” and the “Colossus of Clout,” but St. Agnes Hospital hopes to ensure Babe Ruth is also remembered as a son of Southwest Baltimore.
George Herman Ruth Jr. played for the New York Yankees and the Boston Red Sox, but as a youth he honed his baseball skills behind St. Mary’s Industrial School for Boys, a Catholic school and orphanage, where he lived from ages 7 to 19, although he was not an orphan. St. Mary closed in 1950, and the site became The Cardinal Gibbons School in 1962. The school closed in 2010.
St. Agnes purchased the property’s 32 acres last year from the Archdiocese of Baltimore. The hospital plans to transform the property into Gibbons Commons, a mixed-use development to include affordable housing, office and retail space, and a state-of-the-art baseball diamond.
The site’s current baseball field will be reoriented so that home plate sits where it did in the days of Babe Ruth. Expected to cost $1.5 million, the Babe Ruth Field is being developed in conjunction with the Cal Ripken Sr. Foundation, which has built 14 similar “youth development parks” for at-risk youths.
Gibbons’ park is designed to accommodate football and lacrosse, and will be adjacent to an activity center that may also offer fitness and wellness training and education. St. Agnes plans to begin construction on the field this year, and the park will be among Gibbons Commons’ first completed components.
“This field will be open to at-risk youth to make sure that they have opportunities to play sports and get exposed to sports for all the good reasons you want to do that,” said William Greskovich, St. Agnes’ vice president of operations and capital projects.
Bonnie Phipps, St. Agnes Healthcare president and CEO, said in an April 19 statement that “the vision for Gibbons Commons was to create an innovative plan consistent with the needs of Southwest Baltimore, ensuring the health and spirit of our community continues to grow.”
Greskovich acknowledges that the community development project is an unusual undertaking for a hospital, but it aligns with St. Agnes’ mission to build healthy communities, he said.
“I hope it is a place with a lot of activity,” he said.
It also sustains a community asset.
“Not everyone in Baltimore probably realizes that Babe Ruth began at this campus. It’s a compelling story,” he added. “The way we’re developing this, it sets itself up to memorialize and celebrate his history and his connection to Southwest Baltimore in that history.”
Wayne McDowell, a 1967 Gibbons graduate who, as a member of the school’s board of directors, led efforts to resist the school’s closure, commends St. Agnes’ efforts to turn the school’s campus into a community hub. He sees the new field as a “perfect” fit, given its Babe Ruth connection.
“It’s good to see something good happening,” said McDowell, a parishioner of St. Augustine in Elkridge. “Right now you have big empty corner there. … Having them (Gibbons Commons) there opposed to some big commercial or industrial site on the corner is a great sign of life in the community.”
Copyright (c) May 25, 2013 CatholicReview.org
PrevNext