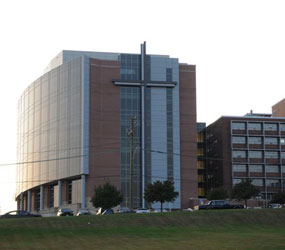 It has been a time of celebration at St. Agnes Hospital Center as the staff, friends and benefactors of the 135-year-old Baltimore Catholic health care institution prepared May 19 to officially dedicate the new patient tower, the centerpiece of the $200 million transformation of its 32-acre campus.

She was to be joined for the ribbon cutting by the Baltimore archdiocese’s urban vicar, Bishop Denis J. Madden; Tony Tersigni, president and CEO of Ascension Health; Dr. William Cook, chair of the Seton Medical Group’s board of directors; Barbara Buzzuto, chair of St. Agnes’ board of directors; William Greskovich, the hospital’s vice-president of operations and capital projects, and Willard Hackerman, president and CEO of Whiting-Turner Contracting the tower’s contractors.

The new tower will be open to patients May 22.

Earlier in the week, on May 12, CEO Phipps and St. Agnes’ Daughters of Charity, whose order founded the hospital and who still serve it, unveiled “Spun Grace.” It is a stunning, abstract large metal sculpture that hangs suspended in the new tower’s main entrance lobby, and which can freely and softly rotate as movement occurs around it, suggesting swirling white clouds in the sky.

Made up of three large, curved-shaped white pieces of highly polished light aluminum, it was designed by the nationally acclaimed Baltimore sculptor, Mary Ann Mears who is locally best known for her sculpture “Red Buoyant” in the Inner Harbor. The metal was fabricated to Mears’ design by the East Baltimore company, Kelco LLC.

“It is my hope that this sculpture will convey an uplifting and positive feeling to all those who visit the hospital for years to come,” Mears said. “As the title, ‘Spun Grace,’ suggests, this piece is intended to be very graceful and convey a sense of fluid movement.”

CEO Phipps said she was “awestruck” when she first saw the sculpture and has decided that, because of it inspiring presence, the main entrance lobby will now be called, “the Rotunda.”

As with every aspect of the campus expansion plan, the new patient tower was conceptualized and designed with extensive input from physicians, nurses, and administrative employees throughout the 308-bed, full service community teaching hospital.

Doctors, nurses and support staff used what is known as the “lean” process. It was originally used by Toyota to make their manufacturing process more efficient by employing methods and techniques to insure that the end product is as efficient and user friendly as possible.

Phipps said the staff at St. Agnes applied this philosophy by “starting at the patient bed and building the tower out from there.”

Every room in the tower is private. Phipps noted that having one patient per room is not only conducive to a more comfortable patient and family or care giver experience, “but it is also safer.”

Such an arrangement will “reduce the risk of infection and allow patients to rest in a quiet and controlled environment,” she explained.

Also, she noted, the floor plan is patient focused. Each floor features three nursing stations spread through the center of the building with patient rooms surrounding them. Such a plan ensures that nurses are never more than a few steps from the patients for whom they are caring, Phipps said. Furthermore, she added, all necessary medical supplies are stored centrally as well, thus allowing quick and easy access.

Also underway as part of the St. Agnes expansion is construction of the 13,000 square foot Hackerman-Patz House, made possible by a $2 million donation from contractor Willard Hackerman and his wife, Lillian Patz Hackerman to honor the memory of their parents.

It will be used initially to house the hospital’s Daughters of Charity, allowing them to remain close to patients and associates “so that the St. Agnes mission will continue to thrive,” Phipps said.

It will later be used to provide a comfortable and convenient place to stay for family and loved ones who have an extended stay at the hospital, she said.

Still on the expansion agenda is construction of a 60,000 square foot medical office building that will be used to house the hospital’s expanding cancer and cardiovascular programs. Also, the hospital plans to build a $5 million, 339-space parking garage.

“We can look down from this hill and see all of Baltimore, which we have served for so many years – and they can look up at our expansion and growth, and see that a new day is coming for St. Agnes and our community,” said Dr. Adrian Long, the hospital’s executive vice president and chief medical officer.