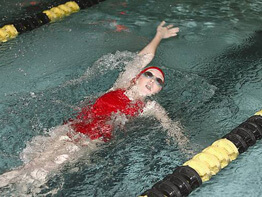 Strong performances from Mount de Sales, Catonsville, and Notre Dame Preparatory School, Towson, were not enough to dethrone the perennial power of McDonogh School, capturing their fifth straight Interscholastic Athletic Association of Maryland’s A Conference Swimming Championship Feb. 4 at the University of Maryland Baltimore County campus while Archbishop Spalding, Severn, walloped the B Conference competition by a margin of 140 points.

There was talk, before the first swimmer hit the water, that Mount de Sales, who remains a young program and who has shown continued growth and steady improvement meet after meet, may have had just what it took to take down McDonogh but in the end, despite a number of personal best times, the Sailors and the Notre Dame Prep Blazers came up short.

The second-place Sailors received stellar performances from their relay teams, scoring 34 points in the 200-yard medley behind juniors Emily Dean, Jenna Moore, Jackie Hamil and Mattie Riley. Moore (25.21) and Riley (25.10) also combined for 29 points in the 50-free with a third and fourth place finish.

Riley (55.51) and freshman Erin Shea (55.58) finished three-four mid-way through the meet in the 100-free. The Sailors’ 200-free relay team, comprised of juniors Jennifer Nevin, Moore and Riley teamed up with sophomore Theresa Gallagher with a time of 1:41.41. Emily Dean also placed first in the 100-backstroke with a time of 59.55.

Also stepping up for the Blazers was junior Maggie Broderick and freshman Jordan Paavola. The Blazers will lose 12 seniors at the end of the season but look to a strong underclass squad to keep the program strong.