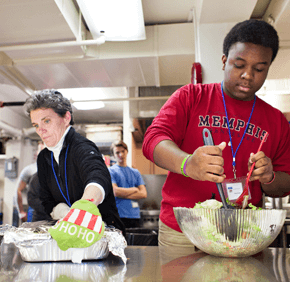 By Maria Wiering
mwiering@CatholicReview.org
“No one’s going to believe this,” exclaimed Skyler King, a senior at Archbishop Spalding High School, as he took the microphone.
The audience expected him to launch into an acceptance speech, but he paused, pulled out his camera phone and took a video, slowly scanning the crowded banquet room. He was clearly thrilled, and the audience laughed with his unabashed impulse to capture the moment.
Catholic Charities of Baltimore recognized Archbishop Spalding March 31 for its contributions to Sarah’s House, which serves homeless people in Anne Arundel County.
Since 2009, Spalding students have prepared, served and shared monthly meals for homeless men, women and children living at Sarah’s House in Fort Meade. The quality and longevity of their service prompted Bruce Clopein, Sarah’s House volunteer resource manager, to nominate the school for the Anne Lindsey Otenasek Youth Service Award.
“They embody a lot of the mission-driven goals of Catholic Charities: to love and to serve,” said Clopein, who has worked at Sarah’s House 13 years. “They’re there to break bread, so to speak.”
Catholic Charities Executive Director William J. McCarthy and Archbishop William E. Lori, Catholic Charities’ board of trustees chairman, presented the award to Spalding’s student representatives at an annual Catholic Charities gala celebrating the agency’s work.
McCarthy noted that some of the youth living at Sarah’s House are the same age as the Spalding students.
King accepted the award on behalf of the student body, with 12 beaming schoolmates standing behind him.
“Thank you so much,” he said. “As a youth, it’s hard to grasp what Catholic Charities does in our state and across our nation.”
After expressing appreciation to Sarah’s House and his school, King turned his gratitude heavenward.
“Thank God for the opportunity to live out his ministry on this earth,” he said. “It makes us better people and a better generation overall.”
Spalding students are involved in every facet of the meal service, including planning menus and purchasing groceries. It’s is the only school with a dedicated presence at Sarah’s House, said Clopein, who added that so many Spalding students are involved in the outreach to Sarah’s House that the volunteer groups are always different.
A contingent of six to eight Spalding students, parents and faculty members regularly serve up to 66 people living at the emergency shelter; participants in the transitional housing program eat in their apartments.
The entire Sarah’s House community, however, can participate in family activities planned by Spalding students. These have ranged from craft projects to movie nights.
Sarah’s House is a partnership of Catholic Charities, Anne Arundel County and the U.S. Army. Spalding’s award honors members of what Clopein calls the shelter’s fourth partner: the community.
“When people think of the value, the benefit of volunteer outreach, they think of the assistance it provides to those who are being served, but I think it also builds better communities in the other sense, in that it enhances the values of compassion and empathy,” he said.
The Anne Lindsey Otenasek Youth Service Award is named for a Notre Dame Preparatory School alumna who died in the 1988 bombing of Pan Am Flight 103 over Lockerbie, Scotland, as she returned to Maryland from studying abroad.
She had volunteered at Catholic Charities’ Gallagher Services while a high school student in Towson, which influenced her plan to major in special education at Western Maryland (now McDaniel) College in Westminster.
In remarks during the gala, Archbishop Lori said, “It’s not the buildings, it’s not the programs; it’s the people whose lives have been touched” that showed the character of Catholic Charities.
Also honored for their contributions to Catholic Charities March 31 were Distinguished Service Award recipients James A. Gabriel, Harkins Builders and St. Elizabeth Anne Seton parish in Crofton; and Mission in Action Award recipients Kathy Awalt, Thomas Berry Sr., Donna Branch, Ezra Buchdahl, Rhonda English Battle, Victoria Hammond and Barbara Johnson.
Also see:
Taking a look at the minimum wage issue – an interview with a Sarah’s House resident
Family, with help from Catholic shelter, seeks to get back on feet
PrevNext