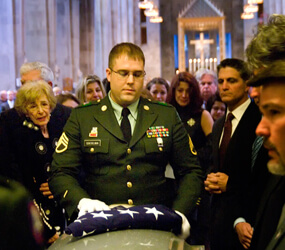 Army Staff Sgt. Scheidelman unfolds the American flag to re-drape the coffin of Army Spc. Christopher James Coffland at his funeral Mass Nov. 21 at the Cathedral of Mary Our Queen in Homeland

As more than 800 mourners sang “America the Beautiful” and the bells of the Cathedral of Mary Our Queen tolled on a sunny Nov. 21 afternoon, Toni Coffland silently reached out and touched the gray casket that held her 43-year-old son, Christopher.

The mother’s moist, disbelieving eyes watched as military personnel and pallbearers solemnly draped the casket in an American flag while her husband, Dave, wrapped an arm around her at the end of a two-hour funeral liturgy.

Before leaving the Homeland cathedral, the grief-stricken mother bent down and embraced the flag-draped casket in one final gesture of farewell. Outside, many mourners openly wept and hugged one another, while a pair of kilt-wearing bagpipers played “Amazing Grace.”

Christopher J. Coffland, a Baltimore native, was killed by a roadside bomb Nov. 13 in the Wardak province of Afghanistan. The Army reservist, who had joined the military a month before he reached the enlistment age limit of 42, had been in Afghanistan for two weeks working as an intelligence specialist.

In his homily, Father Thomas J. Protack said Coffland did not lose his life in vain. The pastor of Toni and Dave Coffland’s family parish of St. John Neumann in Berlin said the loss represented a dying to self in the interest of others.

“Christopher James Coffland wanted to be a servant and helper to others,” said Father Protack, reflecting on Christ’s teaching that a grain of wheat cannot bear fruit unless it falls to the earth and dies.

“He wanted to be a soldier for his country,” Father Protack said, “and he has produced much fruit and a bountiful harvest of friends, family and countless people all around the world who called him a friend.”

Noting that St. Paul speaks of running the good race, Father Protack described Coffland’s race as one that was “so unique and special.”

A talented athlete and artist, the soldier graduated from Gilman School in 1984 and earned an undergraduate degree from Washington and Lee University in 1988.

Among his diverse experiences, Christopher Coffland played professional football for the Helsinki Falcons in Finland, tended bar in Baltimore and coached lacrosse at Boys Latin School of Maryland.

“This passion to quench his thirst for knowledge found Chris in sub-Sahara Africa with pygmy hunters running away from guerillas, hunting crocodiles and living in a grass hut,” Father Protack said.

Willie Franklin, a longtime friend, said Coffland was “tough as nails” and always focused on others.

“Chris probably volunteered to go on that last mission so someone else could stay out of harm’s way,” Franklin said.

Bill McComas, another friend, remembered that Coffland once visited a prison in Jessup and gave a talk that inspired the inmates.

“They gave you a standing ovation,” said McComas, addressing his deceased friend directly. “You could make anyone laugh.”

John Nozemack, who had known Coffland since childhood, said his friend grew more open to new ideas and cultures as he grew older. He also became more spiritual.

Nozemack recalled that when Coffland played lacrosse, he often chose to pass the ball even when he had open shots. Nozemack once asked him why he didn’t make those shots.

“Dude,” Coffland responded, “You know that’s not what I’m about.”

Coffland was known as “Uncle Chris” to Nozemack’s children and was a role model for them.

“He was a big, furry, muscular muppet who could do no wrong,” Nozemack said. “Chris knew what it truly meant to be a friend. You could always trust him with your life.”

Auxiliary Bishop Mitchell T. Rozanski offered the final commendation at the funeral, where Gov. Martin J. O’Malley was among the mourners. Archbishop Edwin F. O’Brien visited the family Nov. 27 at the Lemmon Funeral Home in Timonium.

Coffland will be laid to rest Dec. 1 with a full military honor burial at Arlington National Cemetery.