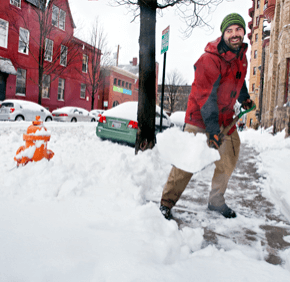 By Catholic Review Staff
The heaviest snowfall of the winter led to the closure of schools, institutions and offices in the Archdiocese of Baltimore Feb. 13.
From Cumberland to Annapolis to Bel Air and all points in between, every system in the archdiocese closed schools in response to a storm that had already dumped more than a foot of snow on some areas of the Baltimore metropolitan area by daybreak Thursday.
Loyola University Maryland and Notre Dame of Maryland University in Baltimore, as well as Mount St. Mary’s University in Emmitsburg, also closed their campuses.
The Catholic Center, archdiocesan headquarters, was also closed for the day, and some parishes canceled regularly scheduled morning Mass.
With Gov. Martin O’Malley urging citizens to remain indoors and avoid travel, meanwhile, Catholic Charities of Baltimore continued plans to provide meals and emergency housing to those in need.
According to a Catholic Charities’ spokesman, the lunch program at Our Daily Bread Employment Center was to open as usual, with staffers from various programs and residents of the Christopher Place Employment Academy filling in for volunteers who can’t make it to The Fallsway in Baltimore.
My Sister’s Place Women’s Resource Center and the Weinberg Housing and Resource Center, both in Baltimore, also remain opened for business as usual. The latter, which usually houses 275 people, took in an additional 100 guests the night of Feb. 12, while four women who are homeless spent that evening at My Sister’s Place Lodge on Mulberry Street.
See also:
God is in the Clouds: Praying to Saint Medard, the patron saint of bad storms
Hackerman remembered as supporter of Catholic education
PrevNext