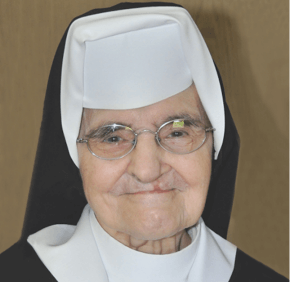 By Catholic Review Staff
A funeral Mass forSister Mary Lina Litvik of the School Sisters of Notre Dame was offered Feb. 6, at Villa Assumpta in Baltimore. Sister Mary Lina died Jan. 23. She was 98.
The seventh of eight children born to Czech immigrants, her 1917 birth was considered remarkable, as neither she nor her mother were expected to survive, though both did.
Sister Mary Lina became a candidate for the School Sisters of Notre Dame at 16; she was sent to St. Augustine in Elkridge to cook and do housework.
After professing her first vows in 1936, she was sent to St. Mary’s Convent in Bryantown, now within the Archdiocese of Washington, as the cook.
Sister Mary Lina came to Villa Assumpta in 1957 to manage the refectory, or communal dining room. She later assumed responsibility for the chaplain’s dining room, the visitors’ dining room and various other community services.
An obituary written by Sister Jeanne Hildenbrand of the School Sisters of Notre Dame describes Sister Mary Lina as “quiet and unassuming” as well as “easy to love and a good listener.”
“She took joy in simple things and her belief in God never wavered,” wrote Sister Jeanne, noting Sister Mary Lina’s fondness for “walking around the circle with the Blessed Mother statue,” gardening and spending time in the convent’s hobby shop.
“She was a living example of prayer and presence,” Sister Jeanne wrote.
During her life, Sister Mary Lina described helping Sister Benigna Brandl with the altar as her “greatest happiness.”
Sister Mary Lina’s funeral Mass was celebrated by Father David Carey. Bishop William C. Newman, retired auxiliary bishop of Baltimore and former chaplain of Villa Assumpta, as well as a friend of Sister Mary Lina, was present.
Read more obituaries here.
PrevNext