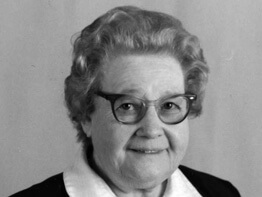 A funeral Mass was offered Sept. 1 at The Villa, the Religious Sisters of Mercy’s retirement home in Towson, for Sister Marian Millard, R.S.M., 86, who died of heart failure Aug. 29.

Born Louise Olive Millard on July 9, 1921 in Columbus, Ga., she was a daughter of the late Catherine (Stiles) and David Henry Millard. She entered the Mercy community at Mount St. Agnes in 1941 and received the name Sister Marian. She professed her final vows on Aug. 16, 1946.

Sister Marian earned a bachelor’s in education from Mt. St. Agnes College in 1963 and her M.Ed. in reading from Loyola College in Maryland, Baltimore, in 1972.

She also taught in schools in Georgia and Florida.

Moving into health care, Sister Marian served as a secretary at Stella Maris, Timonium (1984-87); admissions clerk at Mercy Medical Center (1987-98) and volunteered at Mercy until her move to The Villa in 2003.