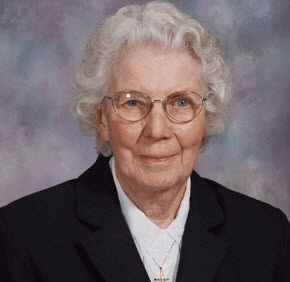 By Catholic Review Staff
A funeral Mass for Sister of St. Francis of Philadelphia Margaret Eugene Beall was to be offered Sept. 13 at Our Lady of Angels Convent chapel in Aston, Pa. Sister Margaret died Sept. 9. She was 90.
A native of Baltimore, Sister Margaret was a parishioner of St. Brigid in Canton and a graduate of the former Eastern High School in Baltimore.
She entered the Sisters of St. Francis of Philadelphia in 1945 and professed first vows in 1948.
Sister Margaret served for 41 years in the Archdiocese of Philadelphia and 24 years in the Archdiocese of Baltimore. She ministered in education and congregational administration.
From 1989 to 2011, Sister Margaret ministered at The Catholic High School of Baltimore, as a teacher and an office assistant in the technology department.
In 2011 she moved to Assisi House in Aston, Pa. where she served in prayer ministry until her death.
She earned a bachelor’s in business education from Marywood University in Scranton, Pa. and a master’s in educational administration from St. Bonaventure University in Bonaventure, N.Y.
For more obituary articles, click here.
PrevNext