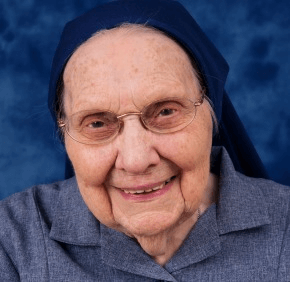 By Catholic Review Staff
A funeral Mass for Sister Edith Stricker of the Daughters of Charity of St. Vincent de Paul was offered Feb. 7 at the Basilica of the National Shrine of St. Elizabeth Ann Seton in Emmitsburg. Sister Edith died Jan. 31; she was 98.
Born in Baltimore, Sister Edith was a Daughter of Charity for 80 years. Graduating from the former Seton High School in Baltimore in 1936, she would later earn a bachelor’s degree from the former St. Joseph College in Emmitsburg, in 1960.
Sister Edith ministered primarily in education, teaching in Virginia, New York, Michigan, Connecticut, and Maryland – in the Archdiocese of Washington, D.C. She also ministered in parishes, in the Carolinas and again in the Washington Archdiocese.
From 2004 until her death, she served in prayer ministry at Villa St. Michael in Emmitsburg.