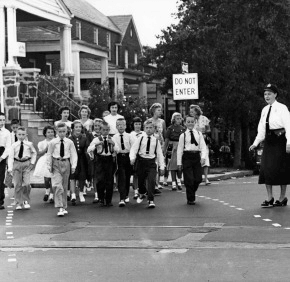 By Paul McMullen
pmcmullen@CatholicReview.org
The largest parishes in the Archdiocese of Baltimore are found in the suburbs, reflecting a decades-long migration from city to county.
Among the 10 jurisdictions in the archdiocese, Baltimore County is the most populous, with 805,000 residents, according to the 2010 census. Anne Arundel County, with 537,000 people, is closing in on Baltimore City, which numbered 620,000 in the most recent census.
That is in marked contrast to 1950, even before the post-World War II Baby Boom peaked, when the city had approximately 950,000 residents, nearly twice as many as the five metropolitan counties (Anne Arundel, Baltimore, Carroll, Harford and Howard) combined.
Then, the city was awash in large parishes, such as the Shrine of the Little Flower, in northeast Baltimore.
In the Shrine’s heyday, its summer carnival stretched over 10 days.
Its chapter of the Holy Name Society welcomed 252 members – in one recruiting drive.
Its parish school counted more than 1,700 students.
Little Flower had opened on Belair Road in 1926, and according to a golden jubilee book commissioned by the parish, it tripled to 4,500 parishioners in its first decade and produced a vibrant parish community typical in the city, from South Baltimore to Irvington to Gardenville.
Little Flower opened a chapter of the St. Vincent de Paul Society and started Boy Scout and Girl Scout troops, all during the Great Depression. The Little Flower Players formed in 1942, boosting spirits during World War II.
In 1951, 95 percent of its 2,500 homes pledged daily recitation in the Family Rosary Crusade. One of its own was off at seminary, as Father F. Joseph Gossman was the first graduate of Little Flower School to be ordained a priest. He would go on to be Baltimore’s first urban vicar and then Bishop of Raleigh, N.C.
The parish had its own newsletter, “The Shrine,” which that same year reported that “Little Flower School children again sold more subscriptions to the Catholic Review than any other school in Baltimore. 1,202 pupils sold 1,440 subscriptions.”
Its new church was dedicated in January 1952. New classrooms were up next, as a school built to accommodate 700 students was over-crowded. (Little Flower School closed in 2005; two charter schools now occupy its buildings.)
The new wing was dedicated in 1956, but more space was needed by 1959-60, when enrollment peaked at 1,716 children and the staff consisted of 21 Franciscan Sisters of Philadelphia and five lay teachers.
Greg Malanowski, 61, was a second-grader that year.
“There were 80 kids in my first-grade classroom, and there were two other first-grade classes,” said Malanowski, who works in advancement at nearby Archbishop Curley High School. “The Scout troop was so large, half of us met on Monday, the other half on Friday, at the hut in Herring Run Park.”
Malanowski’s mother helped with fundraising for the Scouts. He joined his father at Communion breakfasts sponsored by the Holy Name Society. From third grade on, every school day began with 8 a.m. Mass. From the fifth grade on, he sang in the boys’ choir.
Parents had the Catholic Daughters of America and a Knights of Columbus council, and weekend retreats to Manresa on Severn to further nourish their spiritual growth. Socially, there was a St. Patrick’s Day dance and “stag” oyster roasts.
There was a national-caliber Drum Corps, every sport imaginable through the Catholic Youth Organization, and Little Flower leagues at the bowling alley beneath the Read’s drug store across Belair Road.
“It was,” Malanowski said, “a fantastic place to grow up.”
PrevNext