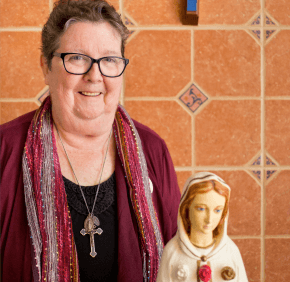 By Maria Wiering
mwiering@CatholicReview.org
BEL AIR – Kate McJury left the Catholic Church because she didn’t believe the things couldn’t see.
Seeing things she couldn’t believe brought her back.
McJury, a parishioner of St. Francis de Sales, Abingdon, was a 20-something Army wife and young mother when she first dabbled in the occult. She was living on an American military base in Germany and finishing a degree in psychology when a University of Maryland professor introduced her to parapsychology, the study of paranormal and psychic phenomena.
McJury, 63, was raised Catholic, but had stopped practicing the faith as a young adult because she didn’t think it gibed with reason. For almost a year, she practiced elements of New Ageism. She read people’s psychic auras and told past lives, practices popularized midcentury by the American mysticist Edgar Cayce.
One evening, McJury was meditating before a lit candle, watching the flames morph into figures who acted out stories, she said. At first she was amused, she said, and then was overcome with a life-changing realization.
“I said, wait a minute. If this stuff I can see and it’s real, then I’m on the wrong side,” she said. “I went running back to the Catholic Church in terror.”
She sought confession and redirected her spiritual interest toward deepening her Catholic faith. Today she is a prayer leader with Unbound, a deliverance ministry based in Ardmore, Pa., that helps people seek freedom from spiritual oppression. She also regularly assists with deliverance ministries in the Archdiocese of Baltimore.
Since leaving occult practice, McJury, the mother of six, has engaged in a range of ministries, from visiting the ill and dying to praying for an end to abortion. She was also active in the early years of the Catholic charismatic movement after having what she describes as a profound, Pentecost-like experience of the Holy Spirit.
McJury moved to Maryland in 1998 and is a Spanish teacher at Harford Day School, a private grade school Bel Air. She lives nearby, with her son and their rescue dog Lily. Her living room contains several religious statues, crucifixes and artworks, some of her own creation.
According to a 2009 Pew Research poll, about one-quarter of adults say they believe in certain tenets of Eastern religions or elements of New Age spirituality. Catholics rank slightly higher than average; 29 percent of Catholics surveyed believe in astrology and the existence of spiritual energy in physical things.
As Halloween approaches, McJury cautions occult practice is not to be taken lightly, and could invite evil spirits into people’s lives.
The Catechism of the Catholic Church states, “All forms of divination are to be rejected,” and lists various efforts to unveil the future, including astrology, palm reading and the “phenomena of clairvoyance.” It also states that “all practices of magic or sorcery, by which one attempts to tame occult powers … are gravely contrary to the virtue of religion.”
McJury sees parapsychology as a direct link to demons, which the church teaches are actual creatures, not mere metaphors.
“By saying ‘yes’ to the occult, by saying ‘yes’ to New Age, I’m turning against God,” she explained. “It’s a deliberate choice from my free will. I’m choosing not to go with God, but to go with man’s ability, man’s superiority, man’s ego – that I can do things with my mind that other people can’t.”
In that “turning away,” a person gives demons permission to influence them, she said.
“You’re inviting them in, basically.”
Also see:
Be ready with God’s weaponry, pope says: devil is real
Charles Village Oct. 31 saints celebration an effort to ‘take back’ Halloween
PrevNext