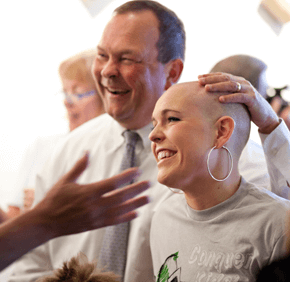 Just minutes before she was to have her long golden locks shaved off for charity, 24-year-old Erin Shannon spoke of the words of wisdom her father had given to her.

So the 2006 graduate of Maryvale Preparatory School did what she wanted March 24, as she sat on a stool at the front of Dougherty’s Pub in Mount Vernon and had her head shaved to benefit the St. Baldrick’s Foundation.

Donned in a T-shirt and large gold hoop earrings, Shannon was all smiles as she took to the chair, where Becky Levine of Neal’s Hair Studio and Day Spa wielded her clippers.

Moments into the procedure an emotional Shannon smiled through tears as family and friends offered words of encouragement.

“Think of all the money you’ll be able to save on shampoo,” one individual shouted.

Shannon Dougherty, daughter of Dougherty’s owner Bill Dougherty (who also had his head and mustached shaved during the event), is also a 2006 graduate of Maryvale.

“As soon as she started tearing up, I let loose,” Dougherty said of her friend. “I wish I had the guts to do it.”

She said she would not describe her friend as crazy or “out-there,” but said the St. Baldrick’s event came up in discussion one day, and Shannon agreed to participate.

“Once she’s committed to something she’s not going to back out,” Dougherty said.

After the shaving was complete, Dougherty looked at her friend and smiled.

Shannon, who was one of more than a dozen “shavees” at Doughtery’s, decided to participate just three weeks prior to the event. By promoting her participation on FB, a local radio station and a downtown gym where she works, she was able to raise more than $4,500 for St. Baldrick’s, which supports childhood cancer research.

According to the St. Baldrick’s website (stbaldricks.org), since its inception in 2000, the foundation has had more than 189,660 volunteers, including more than 17,000 women, shave their heads in solidarity with children with cancer. The foundation has raised more than $123 million for childhood cancer research.

At the event, a moment of silence was held for those children with cancer who were not helped in time.

Levine, who has participated in a St. Baldrick’s fundraiser before, said she thought it was very brave of Shannon, who donated her hair to Locks of Love, to participate.

During the event, an impromptu collection for Bill Dougherty to shave his mustache yielded an extra $320 for the cause, and one woman decided on the spot to shave her head as well.

An event organizer said about $12,000 was collected for the fundraiser.

“It’s been a great experience,” said Shannon, who will enter nursing school in May. “I wish I would’ve decided to do it sooner. I think I’m going to still try to collect more money.”