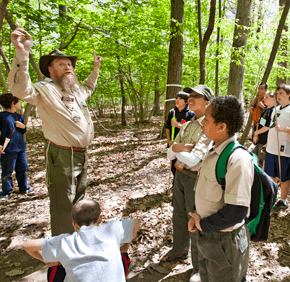 By Elizabeth Lowe
elowe@CatholicReview.org
Twitter: @ReviewLowe
WHITEFORD – Musa Jafri has a lot to teach his peers – and adults.
“People don’t like religions because they (people) are not informed,” said Musa, a Muslim and Boy Scout of America with Troop 794 at Our Lady of Perpetual Help in Ellicott City. “I understand the Jewish Sabbath and holidays and what they do and I learned about Christianity. There aren’t that many differences.”
Musa was one of about 120 Boy Scouts of America from across the state who attended “A Scout is Reverent” retreat May 3-5 at Camp Spencer, part of Broad Creek Memorial Scout Reservation in northern Harford County.
In addition, about 10 Girl Scouts of the United States of America and one member of American Heritage Girls attended, said Victor Torres, the retreat’s youth staff adviser and the father of a member of Boy Scout Troop 2010, which is sponsored by the Knights of Columbus Council 7559 in Columbia.
To view a slideshow from the event, navigate the arrows below.
See a photo you would like to purchase? Click here.
Most Scouts at the interfaith retreat were Catholic, but in addition to Muslims, there were also Protestant and Jewish Scouts. The 12th and final point of the Scout Law, that a Scout is reverent no matter their faith tradition, was reinforced.
“We put a lot of emphasis there because we find that each one of our religions tell us how to be reverent,” said Torres, a parishioner of St. John the Evangelist in Columbia. “We find these elements in common, which allow us to work together to solve issues in the world.”
He continued, “It’s the faith component we are teaching the kids, that although we have differences, there are more things we share in common than keep us apart.”
During the three-day retreat, Scouts participated in various activities – from kickball games to Scripture hikes to bracelet making, among others – all of which had a faith component.
“What they learn, no matter if they are Jewish or Protestant or Catholic, is kids are kids,” said Samir Jafri, Musa’s father and Scoutmaster of the retreat. “It’s OK to have differences with someone and still be your friend. Our goals are to remind them (of their) duty to God. The adults get a lot out of it, too.”
The sacrament of reconciliation was available to Catholics, who attended Mass May 4. Members of other faith traditions participated in their respective celebrations.
Religious similarities outweigh differences, said Brad Harbert, a Scout with Troop 354 at Our Lady of Hope in Dundalk and a senior at Archbishop Curley High School in Baltimore.
“If people would realize that, there probably wouldn’t be that much of an issue,” Harbert said.
“If you don’t know how to respect other faiths, then we don’t know if we’re offending anyone,” said Gabriel Ewachiw, a Tenderfoot with Troop 794. “I could make a joke and think it’s funny, but someone from another faith would not.”
Gabriel noted he enjoyed the retreat because “it’s something to do, it’s not sitting home playing video games. We’re out learning about our faith.”
Monsignor Thomas L. Phillips, chaplain of the Archdiocese of Baltimore’s Catholic Committee on Scouting Leadership and pastor of St. Gabriel in Woodlawn, urges pastors to encourage Scouting.
“Scouting is youth ministry,” Monsignor Phillips said.
Also see:
Cardinal Keeler receives Boy Scouts’ highest honor
Copyright (c) May 6, 2013 CatholicReview.org
PrevNext