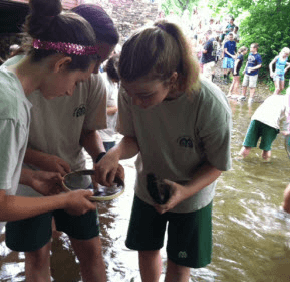 By Catholic Review Staff
Mother Seton School students release trout into creek
Seventh-graders at Mother Seton School in Emmitsburg participated in the national Trout in the Classroom program during the 2012-13 school year, the school announced.
The program focuses on environmental conservation, according to the school. The students learned how to raise trout from eggs to the fry stage – when they were ready to be released into a natural habitat.
“The students have been very responsible stewards,” said Danielle Kuykendall, the middle school science teacher overseeing the program at Mother Seton, in a statement. “They tested the water daily and cleaned the tank twice a week.”
Students monitored the tank equipment and fed the fish.
“We were responsible for feeding them and caring for them, basically keeping them alive,” said Max Kirby, a student in the class, in a statement. “It was hard work, but it was fun to do.”
Most trout survived and were released. The program works to introduce students to ecosystems and instill the importance of environmental conservation.
“We read about it in our books, but to actually see it from the beginning like this was cool,” said Maya Hand, a student in the class, in a statement. “Everything is connected. We learned that if something is off with one system, it can affect how other systems work. So we had to figure out what to do in specific situations so that the fish wouldn’t die.”
Mother Seton School honors students for character traits
Mother Seton School in Emmitsburg awarded 44 students in pre-K through eighth grade with Christian character trait awards in April and May, the school announced.
In April, 21 students received awards for demonstrating fairness: Mason Bowling, William Bush, Josephine Isaacson, Christina Kong, Grace Kovalcik, Rylan Manning, Shane Milbourne, Jean Pembroke, Jaime Price, Bella Rabaiotti, Bradley Reaver, Taylor Reisinger, Austin Riley, Molly Sill, Joseph Shumaker, Cody Small, Bradley Spielman, Brianna Streib, Jane Waybright, Eric Weber and Dacosta Wivell.
In May, 23 students were recognized for demonstrating the value of perseverance – using hard work and resourcefulness in achieving their goals, not giving up and completing tasks, according to the school.
The following students received awards: Benedict Hochschild, Wyatt Staiger, Grace Hewitt, Kyle Kauffman, Broden Wood, Kedrin Varish, Sebastian Gagliardi, Timothy Pickett, Lucas Buhrman, Anthony Kinnamont, Sophia Launchi, Brendan Guinan, Brendan Ott, Timothy Wahl, Emily Dewees, Stephen Bowman, Grace Blanchard, Aiden Cliber, Isabella Alley, Mark Golibart, Jane Bramson, Sean Vietri and Anthony Beasley.
Loyola University Maryland’s Sellinger School of Business and Management ranked in Businessweek
Loyola University Maryland’s Sellinger School of Business and Management was recently ranked second and fifth out of the nation, respectively, by Bloomberg Businessweek for “Best Undergraduate B-Schools for Business Law” for 2013 and “Best Undergraduate B-Schools for Marketing” for 2013, the Baltimore university announced.
“This honor is a recognition of our truly exceptional business law faculty whose commitment to classroom engagement and innovation in their discipline consistently inspires their students and peers,” said Karyl Leggio, dean of Loyola’s Sellinger School, in a statement.
In an additional statement, she said, “We’ve always known our marketing program was outstanding, so I’m thrilled that it has been lauded for the third year in a row by a nationally-recognized business publication alongside programs at the nation’s most elite business schools.”
Four Loyola University Maryland students to attend selective internship program
Four Loyola University Maryland students were selected to attend the Governor’s Summer Internship Program June 3-Aug. 9.
Rising seniors Rebecca Carney, Brendan Fulmer, Kaitlyn Hammel and Danielle Porfido are among 20 university students from institutions across the U.S. accepted into the 10-week internship program, according to the Baltimore university.
The program, run by the Shriver Center at the University of Maryland, Baltimore County, affords students the opportunity to work on projects with senior level public administrators and policy makers in Maryland, according to Loyola. Students are matched with departments or policy areas that correspond with their field of study or career interests.
Carney, who is majoring in global studies, is paired with the Maryland Department of Housing and Community Development; Fulmer, who is majoring in political science, is paired with the Maryland Governor’s Office of Homeland Security; Hammel, who is majoring in elementary education, is paired with the Maryland State Department of Education; and Porfido, who is majoring in political science, is paired with the Maryland Department of Disabilities.
“Our strong presence in such a prestigious program speaks to the quality of the many exceptional Loyola students who are inspired by the university’s Jesuit tradition to develop an unprecedented commitment to leadership,” said CreSaundra Sills, director of Loyola’s career center, in a statement.
Interns will attend meetings, track legislation and research policy options, among other duties, according to Loyola. They will work in teams to develop policy papers that address significant issues the state faces and are expected to present the papers to Maryland Gov. Martin J. O’Malley and/or senior staff members when the program concludes.
Four Loyola students were accepted into the program in 2012, according to the university. Since 2006, more than 25 Loyola students have been accepted into the program.
St. John Regional Catholic School music teacher named distinguished grad
Peggy Frazier, music teacher at St. John Regional Catholic School and a 1983 graduate of St. John, has been named the Frederick school’s 2013 distinguished graduate.
The award recognizes Catholic elementary school alumni who have demonstrated personal and professional achievements as adults, according to the school.
Frazier demonstrates a high level of expertise in music education, creates a warm
learning environment and motivates students to want to learn, among other qualities, according to the school. Her two children are students at St. John.
Frazier earned a bachelor’s in psychology from Mount St. Mary’s University in Emmitsburg, where she is currently pursuing a master’s in music education.
PrevNext