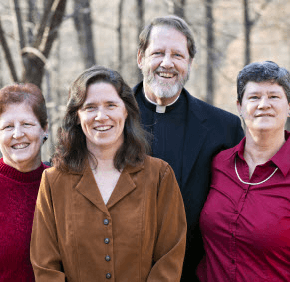 Clare and Robert Moore impressed upon their seven children the importance of education.

Clare, the matriarch, taught English, drama, religion and speech at the Institute of Notre Dame in Baltimore from 1977 to 1995. Her husband, who died decades before his wife’s passing in 2001, also championed higher education.

The Moore siblings established the Clare and Robert Moore Scholarship Fund in their parents’ memory in 2007.

“It’s time for us to pay back those scholarships that helped us fund our education,” said Jane Moore, a co-founder and chairwoman of the fund’s development committee. “We firmly feel it was a nice way to honor our parents. It’s our way to pay it forward.”

Clare Moore was an alumna of Notre Dame of Maryland University in Baltimore.

Incoming freshmen and full-time students in its undergraduate women’s college considering an English major or current English majors can apply for the annual $1,000 scholarship. It can be applied toward tuition, books or room and board.

Recipients who maintain at least a 3.0 GPA can reapply for the scholarship, which is currently funded through donations from family and friends, Moore said.

Clare Moore taught speech to seminarians at St. Mary’s Seminary and University in Roland Park from 1972 to 1977.

One son, Father Christopher P. Moore, pastor of St. Joseph in Hagerstown and the fund’s secretary, said the scholarship is about honoring his parents’ legacy.

“We all benefitted from mom and dad’s concern for education and the value of education and we thought that was a nice tribute,” Father Moore said. “It’s something that will pass beyond us.”

Father Moore noted that his parents made sacrifices so he and his siblings could attend Catholic schools.

In addition to emphasizing the importance of education, Vicky Moore McElroy, another sibling and the fund’s president, said her parents taught about dedication to faith, family and community.

“That has been our battle cry since we started the scholarship,” said McElroy, a parishioner of St. Joseph, Hagerstown. “Let us really commit to paying back to the community. Our parents showed us paying it forward.”

The siblings hope the family’s next generation continues the scholarship, McElroy said.

“We’re looking for this fund to be around for long time,” McElroy said.

Applications are accepted through April 15.

To learn more about the scholarship, visit http://crmoorescholarship.org.