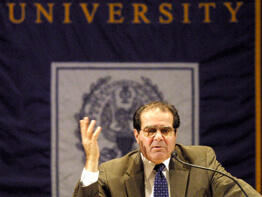 NEW ROCHELLE, N.Y. – U.S. Supreme Court Justice Antonin Scalia said that the Constitution is not a living document and should not be rewritten each year by the unelected justices of the Supreme Court.

Justice Scalia delivered an address titled “On Interpreting the Constitution” at Iona College in New Rochelle, where he is the Jack Rudin and John G. Driscoll distinguished visiting professor for the spring semester. The Jan. 23 lecture was attended by 700 students, faculty and alumni, as well as officials from New Rochelle and Westchester County.

Justice Scalia, a Catholic, described himself as an “originalist,” someone who sees the Constitution as a democratically adopted legal document that does not change.

“It is that rock to which the republic is anchored,” he said. “The Constitution says some things and doesn’t say others.

“If the Constitution does not speak to a matter, it’s for the democratic process to provide an answer,” he said. “If you want something, you persuade your fellow citizens that it’s a good idea and pass a law.”

Justice Scalia said that “over the past 40 or 50 years, the philosophy of a living, or evolving, Constitution has become popular. It is enormously seductive. You think everything you care about passionately is there in the Constitution. Everything comes out the way you want it to.”

He rejected the idea, saying that the Constitution “is not an empty bottle to be filled up by each generation.”

Justice Scalia said, “Rights that never used to exist now do, because the court says so.”

The danger of allowing the court to find such rights, he said, is that it stifles debate.

“Once you read that ‘no state can prohibit abortion,’ there is no use debating it. Abortion has been driven off the democratic stage, coast to coast,” he said, preventing individual states from passing laws that reflect the wishes of their residents.

State legislatures do not resist this, Justice Scalia said, because “they love our taking the heat off them by coming out with a constitutional decision. They love our taking the ‘big A’ off their back.”
As an originalist, Justice Scalia said he looks for what the original intent of the Constitution was. “I think that anything that was constitutional in 1799 is constitutional today,” he said. “Originalism will not always give you an answer you like, but you have to judge based on legitimacy and not whether you like it.”

Justice Scalia, who was confirmed by a vote of 98-0 in the Senate in 1986, said that he doubted that he would be confirmed if he was nominated today.

Four Iona student bagpipers played as Justice Scalia came into the Mulcahy Gymnasium. It was a first for him, he said.

He was introduced by Alexander Eodice, who is dean of the Iona School of Arts and Science and, like Justice Scalia, an alumnus of Xavier High School in Manhattan. Monsignor Ferdinando D. Berardi, pastor of Holy Family Parish in New Rochelle, delivered the invocation, and Christian Brother James A. Liguori, president of Iona College, welcomed the associate justice.

Taran Cardone, president of the Iona student government, presented Justice Scalia with a reproduction of a Celtic cross from the Abbey of Iona in Scotland, a lithograph of Iona’s original building and a history book about the college’s first 50 years.

“Your presence here today has brought us new stature,” she said, “and your visit will be a highlight of the book that recounts Iona’s second 50 years.”