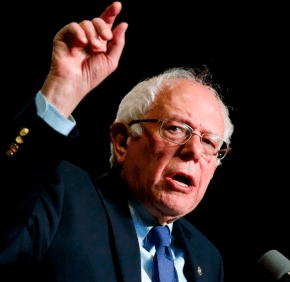 By Carol Glatz
Catholic News Service
VATICAN CITY – U.S. presidential candidate Bernie Sanders said attending a Vatican conference on Catholic social teaching did not represent a political endorsement of his run for higher office.
When asked about the controversy surrounding the invitation during a presidential campaign cycle and whether that translated into the Vatican somehow supporting his bid, he told the Italian daily La Repubblica, “No, that’s not it. The Vatican isn’t involved in that. The conference isn’t a political event.”
Sanders was one of about 35 economists, academics, church leaders and politicians invited to attend a conference April 15-16 dedicated to St. John Paul II’s 1991 social encyclical “Centesimus Annus.” The meeting was jointly sponsored by the Pontifical Academy of Social Sciences and the Institute for Advanced Catholic Studies. Ecuadorian President Rafael Correa and Bolivian President Evo Morales were also invited to speak at the two-day conference.
Sanders told La Repubblica in an interview published April 15 that he was a huge fan of Pope Francis, “even if I have opinions different from his on certain issues.” He said he believes the pope is “a charismatic figure who is helping public opinion become aware of the inequalities in income and wealth that we are seeing in the world.”
“The pope wants to fix the social injustices in society and I am completely with him on that,” he told the Italian paper. Senator Sanders’ talk, titled “The Urgency of a Moral Economy: Reflections on the 25th Anniversary of Centesimus Annus,” was to focus on a just distribution of the world’s resources, inequality in health care and climate change, he said.
Daniel K. Finn, professor of economics and theology at St. John’s University in Collegeville, Minnesota, said in his opening address that the conference was meant to ask where the church needs to “go from here” as it promotes its teachings and actively engages in the world.
The academy’s role includes listening to top specialists to gain insights that “can help both church leaders and ordinary Catholics better understand what is happening around them,” he said in the program’s introduction, jointly written with Margaret Archer, a British sociologist and president of the academy.
Close observation and analysis as well as “a generous listening to the multiplicity of ‘grass-roots’ groups and movements around the globe is critical for an adequate grasp of social reality today,” the introduction said.
Michael Naughton of the University of St. Thomas in St. Paul, Minnesota, told Catholic News Service April 15 that the broad tradition of Catholic social teaching still needs to penetrate people’s daily activities so its principles are translated into action.
Such “specific dimensions” of everyday life include “the intellectual, philosophical, economic, political and cultural” worlds, he said, “and then you need practitioners who are doing these things on the ground.”
The academy, therefore, “is obviously taking the teachings and engaging it in the thought and the practice because what do you have here, you have academics and you have presidents,” he said.
When asked about the implications of the church engaging with politicians and the controversies that that often triggers, Naughton said, “the church always has to be careful of becoming co-opted by either economic or political forces. It is largely a cultural institution, it’s providing a guide to these political and economic realities.”
The church “has to be in the world but not of the world, as they say, but whenever you are in the world, you might sometimes get too close to the world and then you might be used by it” or co-opted by the money, he said.
“You have to be careful,” he said, and have an open discussion about where the line should be drawn, he said.
Copyright ©2016 Catholic News Service/U.S. Conference of Catholic Bishops.
See also:
Legislative wrap-up: 2016 sees successes in education, justice
Rally outside White House Easter Egg Roll seeks end of family detention
Students’ speaking invitation to Planned Parenthood CEO draws criticism
PrevNext