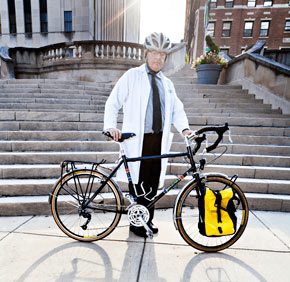 The best investment for a good retirement?

Your health, says Dr. Errol Rushovich, an endocrinologist and internist at Mercy Medical Center in Baltimore.

A cyclist who regularly commutes by bike between downtown Baltimore and his Pikesville home, Rushovich hopes his first cross-country ride inspires patients and colleagues to add regular exercise to their portfolios.

On Sept. 15, he and 13 riders, including his wife Berenice, will begin a 3,160-mile trek between San Diego and St. Augustine, Fla. Their route is taking them through America’s southern states, many of which will be new to Rushovich, the medical director of Mercy’s Center for Bone Health and Division of Endocrinology.

Rushovich views the cross-country trip as a way to model good behavior to his patients. Exercise is crucial in combatting some types of diabetes and osteoporosis, two diseases Rushovich addresses at Mercy, he said.

“Over the years, I’ve strongly believed in exercise in being essential to your good health,” he said before the ride.

Organized by the Missoula, Mont.-based Adventure Cycling Association, the ride is self-supported and self-contained; riders carry their own gear, camp most nights and take turns cooking for the group without a support vehicle’s aid. Rushovich expects beans and rice to comprise many dinners, he said.

Rushovich biked a lot as a kid growing up in South Africa, he said. He got serious about cycling as an adult about 20 years ago, and has completed several 500-mile rides, including one on a tandem bicycle. He regularly trains with his wife on long rides around Maryland, he said.

“We love the outdoors, we enjoy exercise, we enjoy traveling and (cycling) is a combination of those three things,” he said.

The cross-country trip is scheduled to take 65 days, including nine orientation and rest days, with an average of 56.4 miles per cycling day.

The point? “The joy of cycling,” Rushovich said.

It is a joy he experiences two to three days per week as a bike commuter, which “is great way of being physically active,” Rushovich said. “(Exercise) gets built into your day . . . and it feels less like a chore.”

Riding also increases his awareness of the city, he said.

By bicycle, “I find that the city feels very different at different times of the day,” he said, contrasting a Sunday morning to a weekday evening.

For their long ride, the Rushoviches invested in custom-made bicycles from Bilenky Cycle Works in Philadelphia. They cost about $4,000 each, but riding them is the cycling equivalent of driving a Cadillac, Rushovich said – a luxury he hopes will ease full days of cycling.

After nine years at Mercy, it is difficult to step away from his medical practice for two months, he said, but the hospital’s administration, colleagues and his patients have been supportive and are excited to hear about the ride.

“It’s just an adventure,” he said. “I enjoy the challenge.”