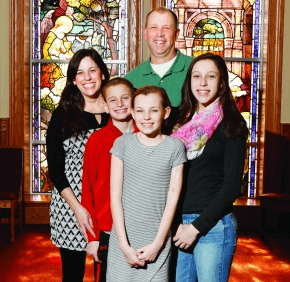 ezygmont@CatholicReview.org
Twitter: @ReviewErik
NEW MARKET – Soon after her daughter was diagnosed with stage-4 bone cancer with metastasis to her lungs, Amy Weaver received a question from some acquaintances.

“We always looked at him as the one who was going to help us,” she said.

Lily Weaver, 14, has been in remission for four years.

Her entire family of five will be fully received into the Catholic Church at the Easter Vigil March 26.

Both outcomes were frequently and fervently requested in countless prayers.

“When Lily got sick, Frank (her husband) and I were constantly going to the hospital chapel,” Amy said.

The Weavers, who at one time had been active in a Methodist church, weren’t the only ones who prayed. Amy took her daughter’s cause and “put it out to Christians” over social media.

“We got letters from China and Africa – all over the place,” remembered Frank.

While Lily was at Children’s National Medical Center in Washington, D.C. – where she underwent and recovered from the stem cell transplant that led to her remission – she received three carts of mail, her father said.

Offering constant prayers were Ken and Irma Tercero, parishioners of St. Peter the Apostle in Libertytown and the Weavers’ next-door neighbors. Irma added Lily’s name to the intentions for St. Peter’s perpetual Eucharistic adoration chapel, where she takes a shift every other week. Ken, the parish organist, prayed the Memorare every time he walked his dogs past the Weavers’ house.

They prayed for Lily’s recovery and something else, too.

“I prayed that they would come into the Catholic Church,” said Irma. “I just think they’re such a lively family – I like the community we have at our church, and I just wanted them to be able to share that community.”

Lily was the earthly impetus. While struggling with cancer, she sometimes spent Saturday nights with Catholic friends, and tagged along to vigil or Sunday Masses.

“When I was sick, all of us would pray,” she remembered, adding that after she became ill she “felt more of a bond with Jesus and God.”

At the same time, Amy was discussing the Catholic faith with her neighbors.

“Ken and I used to always just talk about it randomly, and then when Lily brought it up, it confirmed it,” Amy said.

Lily Weaver’s supporters include Ken and Irma Tercero, neighbors who are among the sponsors of the Weaver family as it joins St. Peter the Apostle Parish in Libertytown. (Bill Ryan/Special to the Review)

It took a little time for the rest of her family to come around.

“There wasn’t any pushing,” Irma Tercero said. “Oh, I guess I did push Frank and maybe Grace (their oldest daughter).”

The tipping point was a backyard barbeque at which the Weavers met Father Jason Worley, pastor of St. Peter.

“They knew how to get me there,” said Frank, a high school P.E. instructor. “Throw some food on the grill.”

The family impressed Father Worley, too.

“You could see the parents’ love for their children and what it brought them – closer to God,” he said.

It was the same bond that brought the family through cancer.

“You come home from the hospital with a healthy baby, and you assume that, apart from colds and flus, that’s what you’ve got,” Amy reflected.

When you learn otherwise, she said, “your world crumbles. Fast.”

At Lily’s first chemotherapy session, she and her mother spent the night at the hospital side-by-side in tiny beds.

Life changed for the whole family. With her parents constantly gone to care for her sister, Grace was struck by the emptiness of the previously boisterous household.

“I think this little munchkin and I have a very strong bond because of it,” she said, nodding at Frankie, 10, the Weavers’ youngest child. “We grew up without everyone in the house.”

Thin and lithe, Lily maintained her pert beauty through cancer, even after shaving her head so her father didn’t have to see her hair falling out.

“That was the worst part for me – I’m not going to lie,” Frank said.

“Since I was very young, I knew what the word (cancer) meant,” Lily said, “but I didn’t know how much it would affect my life and everyone else’s lives.”

Her final take: “Yeah, I think the prayers worked.”

“I think we witnessed miracles with her,” Amy added.

When her daughter had been in remission for two years, she witnessed something else.

“The clinic nurse was just checking in a 19-year-old who was starting chemo,” Amy remembered, “and she called Lily in to talk to him.”

She watched as her daughter went to the anguished young man.

Pope: Priests can be blinded by complex theology, ‘bubbly’ spirituality