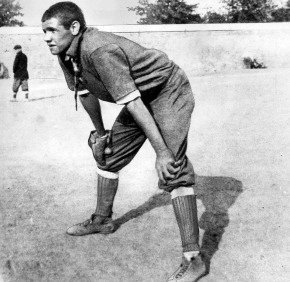 By Catholic Review Staff
Cal Ripken Jr. joined hundreds Nov. 17 for the dedication of the new Babe Ruth Field at Gibbons Commons, across Caton Avenue from St. Agnes Hospital in southwest Baltimore.
The Cal Ripken Sr. Foundation, in partnership with St. Agnes Healthcare, dedicated its 60th “Youth Development Park” nationwide.
“In the spirit of my dad, (the foundation) uses baseball to help kids,” Ripken said. “We want to give them some guidance, a purpose and a sense of direction that they can move in that has a positive and productive effect on the rest of their lives.”
The multi-purpose, synthetic turf facility is located on the site of the former Cardinal Gibbons School and the former St. Mary’s Industrial School for Boys.

A girl puts the new multi-purpose field in action during the dedication of new Babe Ruth Field at Gibbons Commons in southwest Baltimore Nov. 17. (Kevin J. Parks/CR Staff)
The latter’s most famous product is George Herman “Babe” Ruth, considered by many the greatest baseball player ever. Ruth’s most notable New York Yankee teammate, Lou Gehrig, held the Major League record for consecutive games played until Ripken came out of Aberdeen and etched his own Hall of Fame career, all with the Baltimore Orioles.
The new facility’s baseball diamond is positioned on the site where Ruth was taught the game, most notably by Xaverian Brother Matthias Boutilier.

St. Agnes Healthcare bought the 32-acre Gibbons property in 2012 with a “vision of creating a vibrant, mixed-use community providing southwest Baltimore residents with a place to live, work, play and learn.”

An image of George Herman “Babe” Ruth Jr. is displayed on a wall inside the O. Ray Mullis building near the newly dedicated field named in Ruth’s honor. (Kevin J. Parks/CR Staff)

“We want to see change,” said Keith Vander Kolk, president and CEO of St. Agnes Healthcare. “Not just with the activities that we are sponsoring and that will happen on this property, but carrying that kind of opportunity and change back out into the community.
Also present at the ribbon-cutting were Jonathan and Christine Huxtable, who lost their son, Benjamin, to a tragic baseball accident in Lutherville in 2005. The Babe Ruth Field also serves as a memorial to a young boy who loved baseball.

Local children from the Y of Central Maryland Before and After Care Enrichment program rush the new field as part of the dedication ceremony at Babe Ruth Field at Gibbons Commons. (Kevin J. Parks/CR Staff)
“It’s a joyous day, for us as parents, to recognize this true team effort,” said Jonathan Huxtable. “For every all-star, past, present, and future who will use this field, Benjamin’s favorite phrase lives on, ‘Let’s play ball!’”
The first competition on the field was a soccer play-day between before- and after-care students from the Y of Central Maryland’s Holabird Academy and Graceland Park Elementary School in Dundalk.

For more photos or to purchase prints, visit our Smugmug page here.