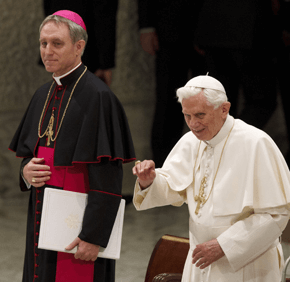 By Cindy Wooden
Catholic News Service
VATICAN CITY – Archbishop Georg Ganswein, retired Pope Benedict XVI’s longtime personal secretary, said a story about the pope resigning after a “mystical experience” was completely invented.
“It was invented from alpha to omega,” the archbishop said Aug. 24 in an interview on Italy’s Canale 5 television news. “There is nothing true in the article.”
In a report Aug. 19, the Italian service of Zenit, a Catholic news agency, said someone who had visited Pope Benedict “a few weeks ago” had asked him why he resigned. “God told me to,” the retired pope was quoted as responding before “immediately clarifying that it was not any kind of apparition of phenomenon of that kind, but rather ‘a mystical experience’ in which the Lord gave rise in his heart to an ‘absolute desire’ to remain alone with him in prayer.”
When Pope Benedict announced his resignation in February, he said he had done so after intense prayer and that he intended to live the rest of his life praying and studying.
Some Vatican officials and Vatican watchers were surprised by Zenit’s report of Pope Benedict telling an anonymous visitor that his decision was the result of some form of extraordinary “mystical experience” rather than a decision made after long and careful thought and deep prayer. Catholics traditionally would consider that kind of intense prayer a “mystical experience,” although not something extraordinary.
Explaining his decision to resign to a group of cardinals Feb. 11, Pope Benedict had said: “After having repeatedly examined my conscience before God, I have come to the certainty that my strengths, due to an advanced age, are no longer suited to an adequate exercise of the Petrine ministry.”
He also told the cardinals that he wanted to dedicate the rest of his life to serving the church through his prayers.
Since stepping down Feb. 28, retired Pope Benedict has led a very quiet life, far from the public eye, although he did accept Pope Francis’ invitation to be present July 5 for the dedication of a statue in the Vatican Gardens.
Living in a remodeled monastery in the Vatican Gardens, along with Archbishop Ganswein and four consecrated laywomen, he occasionally welcomes visitors, especially friends, former students and small groups accompanying former students. The meetings are private and rarely reported in the news.
See also:
Officials dubious of retired pope’s extraordinary ‘mystical experience’
‘Mystery priest’ hopes media hype won’t obscure message of God’s love
Copyright (c) 2013 Catholic News Service/U.S. Conference of Catholic Bishops
PrevNext