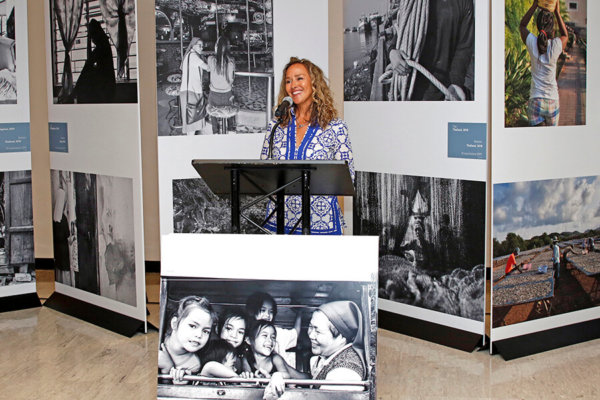 Photographer Lisa Kristine speaks at the July 29, 2019, opening of the "Nuns Healing Hearts" photo exhibition at the United Nations. The event, which featured images photographed by Kristine, was part of a program hosted by the Vatican's permanent observer mission to the U.N. that marked the 10th anniversary of the founding of Talitha Kum, a worldwide association of religious sisters working to end human trafficking and slavery. It was held on the eve of World Day Against Trafficking in Persons. (CNS photo/Gregory A. Shemitz)

Speakers from the Talitha Kum organization headlined a United Nations panel on the eve of the U.N. annual observance of the World Day Against Trafficking in Persons.

“Human trafficking is one of the darkest and most revolting realities in the world today, ensnaring 41 million men and women, boys and girls,” said Father David Charters, second secretary of the Vatican’s permanent observer mission to the United Nations.

“It is, as Pope Francis has repeatedly stressed, ‘an open wound on the body of contemporary society,’ a ‘crime against humanity’ and an ‘atrocious scourge that is present throughout the world on a broad scale,'” he said.

Father Charters said the international response to the global phenomenon includes three specific targets in the U.N. 2030 Agenda for Sustainable Development. They commit the organization’s members to fight trafficking and sexual exploitation, take immediate action to eradicate forced labor, end modern slavery and human trafficking, and end all forms of violence against and torture of children.

Comboni Sister Gabriella Bottani is the international coordinator of the Rome-based Talitha Kum. She said it is a network of networks established by the International Union of Superiors General to coordinate and strengthen the anti-trafficking work being done by consecrated women in 77 countries on five continents.

“Talitha Kum” were the words Jesus addressed to a young apparently lifeless girl in the Gospel of Mark. The Aramaic phrase is translated, “Young girl, I say to you, ‘Arise.'” The network seeks to free people, raise them up and restore their dignity.

Sister Bottani said Talitha Kum uses a victim-centered approach to identify people in need and support them with shelter, social reintegration and education.

“We do not have a model to export. Each of the organizations in the network promotes initiatives against trafficking in its particular local context,” she said.

Some of the sisters dedicate their entire ministry to trafficked and enslaved people, while others provide housing and emergency intervention as needed.

As an example, Sister Bottani said members of the network met a caravan of Hondurans in October 2018 as they passed through Guatemala on their way to hoped-for sanctuary in the United States. They identified potential victims of trafficking and offered assistance, she said.

Talitha Kum also works with some men religious and has begun an interreligious collaboration with women in the Middle East, Sister Bottani said.

Sister Melissa Camardo, a Sister of Charity of Leavenworth, Kansas, is the director of development for LifeWay Network, a safe housing and education program that operates three sites in the New York metropolitan area.

Each house has a full-time core community of three religious sisters who work with a full-time house manager and part-time social worker to provide supportive care and access to education, social services and other tools to prepare for independent living.

Sister Camardo said the houses offer healing in a loving, imperfect, striving community” that is open to both domestic and foreign-born survivors of labor and sex trafficking. The sisters at each site are drawn from several religious communities.

LifeWay guests are referred by social service providers and may have short-term emergency stays or participate in a year-long transitional program. After leaving LifeWay houses, women also are invited to join a mentorship program that uses trauma-informed approaches to increase the survivors’ sense of safety and support their empowerment and self-sufficiency.

Sister Camardo said LifeWay has served more than 100 women from 37 countries. They include Ansa Noreen, who came to the United States from Pakistan as one of four new brides of an American husband. She said entering a “fake” marriage is a matter of survival for many women in developing countries and is a form of human trafficking.

“It’s a way to exploit vulnerable girls,” she said.

Noreen said after her escape from an abusive situation, LifeWay helped her build on her previous experience in fashion design and train for her current job in Web design. She said the sisters “became my first and only family in the United States and restored my confidence. I was able to pursue my passion because I had a safe place to live, food on the table and encouragement.”

Holding Sister Camardo’s hand as she spoke in public for the first time, Noreen said, “I experienced an empathy you don’t see elsewhere.”

Noreen lived at LifeWay for one year and is now part of the mentor program, working to become financially stable and training to be a mentor for other women.

Bishop Marcelo Sanchez Sorondo, chancellor of the Pontifical Academies of Science and Social Science, said human trafficking is a crime against humanity and a new form of slavery. Religious leaders and governments have a moral imperative to eradicate it, he said.

“There is a new awareness that forced labor, prostitution and organ trafficking are crimes. In the horrifying statistics, we are only seeing the tip of the iceberg because some of the crimes are not visible, he said. For example, he said it is not easy to know the number of people trafficked for organ transplants, so they may not be included in the statistics.

Bishops conferences should evaluate the extent of the situation in their own country and then seek solutions, Bishop Sanchez Sorondo said. These might include a commitment to sever relations with institutions that use or benefit from forced labor, or support for legislation that criminalizes customers rather than prostitutes, he said.

Work against human trafficking is a form of evangelization, Bishop Sanchez Sorondo said, because it removes a wound from the body of Christ, communicates the faith and expresses the Beatitudes.

The panel discussion was sponsored by the Vatican’s mission to the U.N., the Pontifical Academy of Science, the Galileo Foundation and the Talitha Kum Network.

It was followed by the launch of “Nuns Healing Hearts,” a weeklong exhibition at the U.N. of photos depicting the efforts of Talitha Kum. After a 30-year career documenting indigenous people in 160 countries, photographer Lisa Kristine turned her attention to human slavery and trafficking.

“Slavery is an endless gauntlet of harsh labor,” she said. “People don’t become enslaved because they’re stupid, but because they they’ve been lied to. They’ve been given promises of education or a better life.”

Kristine said the sisters she met during her photographic journey are humble women working with limited resources who take great risks to help vulnerable people.