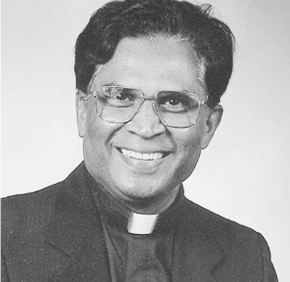 By Father Isaac Karoor
On the Sunday before Father Jack Collopy passed onto eternity I celebrated Holy Mass in his room. He and I concelebrated; he wore his favorite golden color stole. Dan, his nephew, and Dan’s wife Kim and Linda, Jack’s niece, sat around the makeshift altar. They assisted with the readings and the responsorial psalm.

Jack and I had Eucharistic celebrations in historic places including St. Peters in the Vatican, the shrine of the Infant of Prague, the Greek city of Corinth and in Oberamgau in Germany when we went there for the Passion-Play. The Mass in his room was the last one Jack celebrated.

Jack did not look down upon me, instead he suffered with me. He loved priesthood so much that he could not watch silently when a fellow priest was losing it. I do not think I can do the same for someone with half the compassion he had. That is why he ranks very high in the ladder of the most important persons in my life.

Thank you Jack for all you have done for me. In order to thank you adequately I need an eternity. You pray that I get there with you. I conclude with the prayer based on the one in the Eucharistic prayer, “May the body and blood of Christ keep us all safe for eternal life.”

Father Isaac Karoor, who was ordained in 1969, is a retired priest of the Archdiocese of Baltimore, who resides in Sykesville.