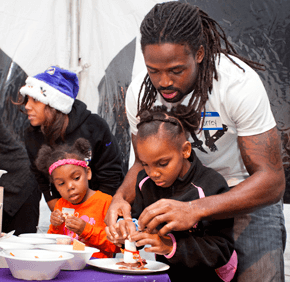 By Maria Wiering
mwiering@CatholicReview.org
Twitter: @ReviewWiering
REISTERSTOWN – Baltimore Ravens wide receiver Torrey Smith was joined by fellow players Ed Reed and Tyrod Taylor Dec. 14 as Smith threw a Christmas party for residents of Sarah’s Hope at Hannah More, a St. Vincent de Paul of Baltimore program that serves homeless women and children in Baltimore County.
“I’ve been in one of these shelters before. I can relate to it,” said Smith, 23, who joined the Ravens in 2011. The oldest of seven with a single mom, Smith, who wears No. 82, said his family was in a similar situation to Sarah’s Hope residents when he was in elementary school in northern Virginia.
“The idea itself was rewarding, but to be here now is even more rewarding than ever,” he said of the event, which he planned with his fiancée, Chanel Williams. “I feel like it’s our responsibility to be here.”
He paid out of pocket for a white, heated tent housing craft projects, chosen by Williams, 25, a fourth-grade teacher at Dogwood Elementary School in Windsor Mill, who wore a purple Ravens-style Santa hat. She brought along five teachers to help kids make paper wreaths, paper gingerbread men and marshmallow snowmen. About 100 people attended the party.
Williams anticipates that she and Smith, who are planning a 2014 wedding, will develop a long-term relationship with Sarah’s Hope at Hannah More, she said. They learned about St. Vincent de Paul of Baltimore online.
“We wanted to help out a smaller organization that didn’t have a lot of support, and adopt that shelter so we always do our work here,” she said. Sarah’s Hope is also close to their home in Finksburg, she added, and it fits with Smith’s foundation work, which helps domestic violence victims.
Juanita Lewis, 35, said the evening was “awesome” for her children, Elizabeth Lewis, 14, and Jayden Fulton, 6. She said she suffered a nervous breakdown after her son’s father died from lung cancer, which led to them living at Sarah’s Hope. They have been at the shelter for 90 days.
“He didn’t have to do this,” she said of Smith. “I really appreciate everything he brings.”
Elizabeth has a passion for football and hopes to play for a professional women’s team someday, she said, partly because it would help to support her family. She said she throws a football “like a grown man” and wants to be a quarterback or wide receiver.
She found Smith’s visit inspiring because the Ravens are her favorite team, she said. Seeing him made her feel closer to her goals, she added.
“He’s supporting what we’re in and how we’re doing it,” she said.
At the end of the party, Smith was joined by Ravens safety Reed, No. 20, and backup quarterback Taylor, No. 2 – a surprise for event attendees, organizers said.
St. Vincent de Paul recently took control of the Reisterstown homeless shelter, which the organization operates in partnership with Baltimore County. It is one of three large Baltimore County homeless shelters.  It was named Sarah’s Hope to link it to St. Vincent’s similarly named West Baltimore program, which shares its mission of helping women and families reach self-sufficiency. It has 85 emergency beds, including 10 convalescent beds.
Several years have past since St. Vincent de Paul has had a program in Baltimore County, said Mary Rode, the organization’s senior vice president of programs.
The evening with Smith shows St. Vincent’s guests that “somebody really cares,” she said.
Homelessness is not as dense in Baltimore County as it is in Baltimore City, but it is still a “huge issue” because of lack of affordable housing, Rode said.
“We have the working poor here. They work at Target, and they work at Walmart, and they work at grocery stores,” Rode said. “They live here with us because they’re right on that poverty line.”
“A lot of families have to decide between paying their rent, paying their BGE (Baltimore Gas and Electric) bill, buying food, buying medicine, and the money doesn’t stretch as far as it used to,” she added.
Related articles: Ravens rusher Ray Rice tells Christopher Place men to seize ‘opportunity’
Ravens Head Coach John Harbaugh finds winning combination
Baltimore Ravens safety Bernard Pollard visits Calvert Hall
Ravens Justin Tucker big on football and faith
Copyright (c) Dec. 15, 2012 CatholicReview.org
PrevNext