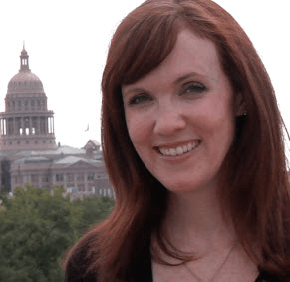 Jennifer Fulwiler, an atheist-turned-Catholic and author of the popular blog “Conversion Diary,” stars in the first Catholic reality show “Minor Revisions with Jennifer Fulwiler.” Produced for the Brooklyn, N.Y.-based Catholic television network NET by Hickory native Amanda Melefsky, the show aired as a three-part series and is now available on Verizon FiOS On Demand and NET’s YouTube channel.

Jennifer, 35, and her husband Joe have five children. They live in Austin, Texas. Fulwiler responded to the Catholic Review’s questions via email.

Q)  Many of the TV show’s viewers will likely already know you well through your blog, which is fairly candid. What do you hope comes from making your life an open book to readers, and now viewers?

A) I hope to be a witness. I love giving people a glimpse into my life, both in the blog and in the show, because it’s proof that even the most lost sheep can be brought home. Also, I think that people see a certain fullness that is lacking in the modern secular lifestyle. I’ve had quite a few non-Catholics tell me that they often feel a yearning for that same “something” that I have when they see my life.

Q)  The show involves you working on a memoir chronicling your conversion from atheist to Catholic. Why is it important for you to tell your story?

A) In the grand scheme of things, it’s probably not that important. After all, I’m sure the Holy Spirit can work things out without my little book. However, it brings me great joy to share my story, because I’m still so excited about the amazing things God has done in my life.

God instilled me with a great love of storytelling, and so it comes naturally to me to write and speak about my conversion. I just put it all out there and pray that God will do something good with it.

Q)  How old were you when you joined the Catholic Church?

A) I began exploring Catholicism in my late 20s, and entered the Church when I was 30.

Q)  How did “Minor Revisions” come about?

A) It was the brainchild of the show’s producer, Amanda Melefsky, as well as the other folks at NET television. They wanted to do a show that would be in a format familiar to viewers of secular television, so a reality show seemed like a natural choice. They saw that I have a long history of sharing my life through my blog, so I think I seemed like an obvious candidate to be a part of it.

I was skeptical at first, since reality shows don’t exactly have a reputation for being the most edifying media in the world. But after I got to know the team at NET better, I was convinced that they had the skills and dedication needed to produce a program that was both entertaining and inspiring.

Q)  How well do you think the shows have captured your family life, which the trailer notes is “messy and noisy”?

A) Very well. Many of our friends and family members have remarked that the show gives a real feel for what it’s like to be at our house.

Q)  What do you think will resonate most with other Catholic families?

A) I think that Catholics will recognize that joy we have that can only come through Christ. Our life is not easy, because following Christ is not always easy, and I think that comes through in the show. However, our life is full of a peace and joy that infuses everything we do.

Q)  What do you think will resonate with non-Catholic families?

A) I think that non-Catholic families might be surprised at how normal we are. Back when I was an atheist, I would occasionally hear about these crazy families who actually practiced strict belief systems like Catholicism, and I assumed that they must be weird – certainly not the kind of people I would ever get along with. I think (hope!) that folks who are not Catholic will see us and say, “Hey, they’re not that different than we are.”

Q)  What lessons about Catholic family life do you hope viewers take away from the show?

A) I try not to hold out our family as the epitome of Catholic family life, since Catholic families come in so many different shapes and sizes. But I do hope that people see that everything is easier when you put your faith at the center of your life, which is certainly true for all Catholic families.

Q)  You have five children and are pregnant. What lessons about Catholic motherhood do you hope viewers take away from the show?

A) I hope that other mothers recognize a kindred spirit, and feel a little less alone in their lives. Modern motherhood can be lonely, since everyone is so isolated these days. Especially for mothers trying to go against the grain and live as faithful Catholics, it can be very difficult. I hope they watch the show and realize that they have a lot of sisters out there like me who are walking the walk with them.

Q) How does having grown up an atheist affect your world view now?

A) It makes me confident in my beliefs, since I know the counter-arguments against the faith so well. Also, I think that my atheist upbringing helps me in the sense that I was always taught to set emotions aside and carefully seek objective truth. Ironically, that mentality is exactly what led me to the church, and it helps strengthen me in my faith when the going gets rough.

Q) Do you connect your blog, other writing and media appearances to the New Evangelization?

A) I like to think of my writing and media appearances as one small part of the New Evangelization. There are so many people out there using all methods of media to spread the gospel, and it’s inspiring to be a part of that. I always enjoy keeping my eye out for the latest advances in communication technology, and seeing how Catholics can spread the faith through those channels.

Q) Do you see a connection between the TV show and the Year of Faith?

A) I think the show is perfect for the Year of Faith, since it’s a concrete example of faith as lived out in one person’s life.

Q) In the show’s trailer, you say that after converting to Catholicism, it is “as if I’m finally living now. I feel like my life has finally started.” Can you explain what you mean by that?

A) Joe often analogizes our lives before our conversion to living in a museum: We wanted everything so perfect and controlled, and the result was this very sterile, ultimately empty life that just looked pretty on the surface. Turning our lives over to God was like breaking out of the museum and stepping into an exotic new world.

We’re surrounded by so much more life – through our children, through our parish and diocese, through our new friends – and we no longer have the illusion that we’re in control of it all. Things are messier and less predictable, but life is also a lot more full and interesting now. When I look back on our old “museum life,” it doesn’t feel like we were really living in comparison to our lives now.

Q) Now that you’ve ventured into reality TV, what else can we look for from you in the future, besides for your new book?

A) I really don’t know! Speaking of things being unpredictable, I recently had some serious health issues arise that have meant that I’ve had to rethink everything. Right now I’m simply seeing where God leads me on a day by day basis.