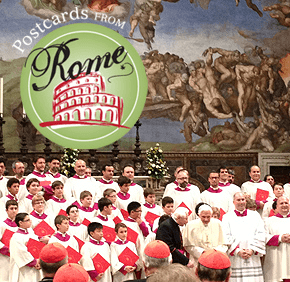 Living in Rome occasionally presents some especially unique opportunities. On Nov. 11, I was invited to a special concert in the Sistine Chapel for the performance of the “Mass of the Holy Year” composed by Pope Benedict XVI’s brother, Monsignor Georg Ratzinger. Both the Holy Father and his 88-year-old brother were present for the concert which was performed by the Pontifical Choir of the Sistine Chapel. It was a special experience to be there with the pope since that is the very room where he was elected.

The choir stood directly in front of Michelangelo’s “Last Judgment” which provided an incredible backdrop for the concert. This photograph was taken immediately after the concert. You can see the obvious resemblance between the brothers! The Holy Father normally gives a speech following the concert, but in this case he said that he would simply give a blessing so as not to impose his opinion.