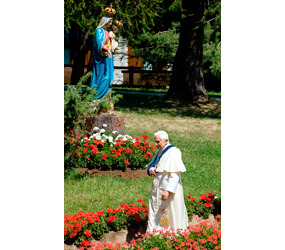 LES COMBES, Italy – Pope Benedict XVI said the Vatican and Italian police who watched over him while he was on vacation in the Italian Alps were like “guardian angels, discreet and efficient.”

But he was not quite so sure what his own guardian angel was up to.

“Unfortunately, my guardian angel –certainly following orders from above – did not prevent my accident,” he said, referring to the fact that he tripped in the dark July 17 and broke his wrist.

Before leaving Les Combes to fly to the papal summer villa in Castel Gandolfo south of Rome July 29, the pope met with the police, firefighters and other officials who were involved in maintaining public order and security while he vacationed in northern Italy.

Still referring to his broken right wrist, the right-handed pope told them, “Perhaps the Lord wanted to teach me greater patience and humility, and give me more time for prayer and meditation.”

The pope said he had spent the past 16 days immersed in a “heavenly peace,” with the silence interrupted only by the songs of birds, rain falling on the grass and the wind blowing through the trees.

“I enjoyed a heavenly peace here. No disturbance could enter. But many good things – both material and immaterial – got in. Many cakes, cheeses, wines,” he said.

Pope Benedict posed for a separate group photograph with each of the public security agencies responsible for patrolling the Salesian-owned chalet where he was staying and with the journalists who followed him to the Alps.