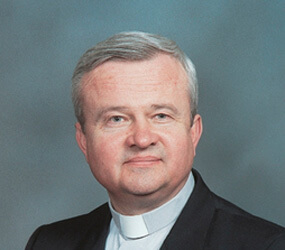 DETROIT – The pastor of a Lithuanian ethnic parish in suburban Detroit drowned July 28 after diving into a lake in an attempt to save his 13-year-old nephew.

Neither Father Ricardas Repsys, 59, nor his nephew, who was visiting from Lithuania, were able to make it back to the boat in which they and two others had been enjoying an outing on Lake St. Clair.

Father Repsys had come from Lithuania in 2004 to become administrator of Divine Providence Lithuanian Parish in Southfield, just north of Detroit.

The parish has a membership of 245 families, but also serves as a community center for many Lithuanian-Americans who belong to other Catholic parishes throughout metropolitan Detroit.

Detroit Archbishop Allen H. Vigneron said July 29: “The sudden loss of Father Repsys is a great tragedy, as is the loss of his young nephew, Toutvydays Skudas.”

Monsignor John P. Zenz, episcopal vicar for the northwest region of the Detroit Archdiocese, said: “It is not surprising that Father Repsys would die literally trying to save a drowning person; he was truly Christ-like.”

“I remember him telling me stories of the risks and dangers and loneliness he endured during the early years of his priestly ministry while taking the train to minister to Lithuanians in Siberia; these were the darkest days of communism,” the priest told The Michigan Catholic, Detroit’s archdiocesan newspaper.

Noting that the other occupants of the boat reported that Father Repsys did not hesitate to jump into the water, Divine Providence parishioner Juozas Orentas said that was the kind of man he was.

“He was a very, very good pastor. He really cared for the people and will be very greatly missed,” said Orentas, who chairs the parish’s administration commission.

Both he and Aldona Sonta, the commission chair, said Father Repsys made a special effort to reach out to members of the latest wave of Lithuanian immigrants – those who came in the 1990s after the country regained its independence following decades of Soviet rule.

Father Repsys was born in Kaunas, Lithuania, in 1950 and ordained a priest for the Marian Fathers of the Immaculate Conception of the Blessed Virgin Mary religious order in 1981. He later became a priest of the Archdiocese of Kaunas.

At the request of his archbishop in Lithuania, Father Repsys came to the United States and began ministry to the Detroit-area’s Lithuanian Catholics. He was granted permanent legal residency in the U.S. in March 2008.