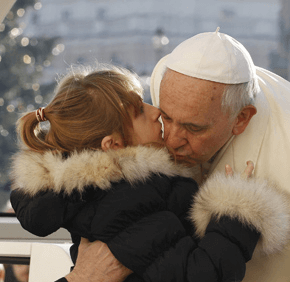 By Francis X. Rocca
Catholic News Service
VATICAN CITY – Pope Francis said Christmas is an occasion of joy but also a lesson in humility, when the faithful are called to imitate the example of God-made-man.
The pope made his remarks Dec. 18, during his weekly public audience in St. Peter’s Square.
“God abases himself, descends to earth as someone small and poor, which means that to be like him we should not put ourselves above others, but on the contrary, abase ourselves, give ourselves in service, make ourselves small with the small and poor with the poor,” he said.
“It is an ugly thing when one sees a Christian who will not abase himself, who will not serve, a Christian who struts about vainly everywhere,” Pope Francis added. “That is not Christian, that is pagan.”
A Christian is obliged to serve, the pope said, because the incarnation means God is to be found in every person.
“If God, through Jesus, involved himself with man to the point of becoming one of us, that means whatever we have done to a brother or sister we have done” to God, he said.
“The birth of Jesus is the evidence that God has taken man’s side once and for all, to save us, to raise us up from the dust of our miseries, our difficulties, our sins,” Pope Francis said.
Clad in a white overcoat and scarf in frigid but sunny weather, the pope led the crowd in twice calling out: “Jesus is God-with-us.”
He noted the “surprising” fact that God did not chose to become man “in an ideal, idyllic world, but in this real world, marked by so many good and evil things, marked by divisions, wickedness, poverty, arrogance and war.”
But “Christmas, the nativity of Jesus, (is) a feast of trust and hope, which overcomes uncertainty and pessimism,” Pope Francis said. “The earth is no longer only a vale of tears, it is the place where God himself raised his tent, the place of God’s encounter with man, of God’s solidarity with men.”
Greeting visitors from various linguistic groups after his audience talk, the pope noted the presence of members of Argentina’s San Lorenzo football team, of which he is a longtime fan. Following the audience, team representatives presented the pope with a replica of the national championship trophy they had won a few days earlier.
See also:
Christians can’t be gloomy because Jesus always brings joy, pope says
Copyright (c) 2013 Catholic News Service/U.S. Conference of Catholic Bishops
PrevNext